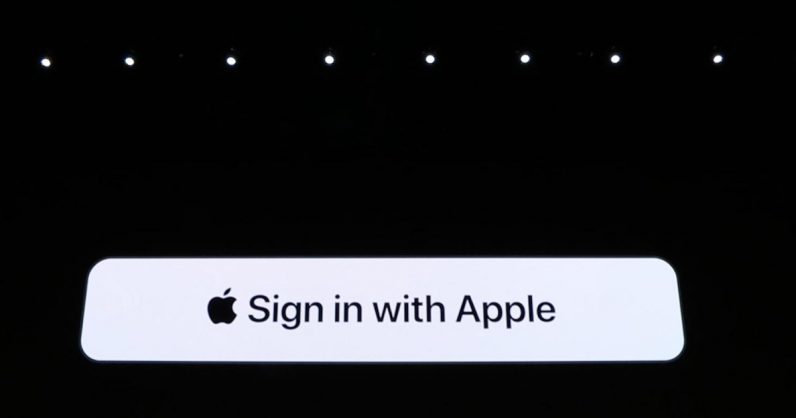 During its WWDC keynote, Apple fired several shots against Facebook and Google with a number of privacy-focused features.

But the one that deserves a special mention is the company’s single sign-on (SSO) feature. Apple‘s SSO is a lot similar to log in with Facebook, Google, or Twitter buttons you see on third-party apps and websites.

To stand out from the current options available, “Sign in with Apple” promises to allow you to sign in without providing any personal information like email addresses to third-parties. When you opt in to hide your email, it will create a unique randomly generated email address that masks the actual email address associated with your Apple ID.

This new feature won’t only limit third-party tracking on Apple devices, it’ll also strong-arm developers to participate. An update to the App Store Review Guidelines reveals that apps that use other companies’ single sign-on features will be forced to adopt Apple‘s.

Sign in with Apple will be available for beta testing this summer. It will be required as an option for users in apps that support third-party sign-in when it is commercially available later this year.

It’s not just about adding a button in the log in screen of the iOS app. Developers will also have to integrate the option on their websites and Android apps as well so that users can sign in from anywhere.

That’s not all. In an important update to its Human Interface Guidelines, Apple is asking developers to position its “Sign in with Apple” button more prominently by putting it above all other rival sign-in options. It’s not a mandatory requirement, but many developers believe that following the guidelines is the best way to clear Apple’s review process.

Apple also isn’t offering a direct way for customers to switch for themselves from Facebook, Google, or another sign-in option to “Sign in with Apple.” Instead, it has left this job of migrating users to developers. All of these complications could result in companies ditching third-party SSOs in favour of their own direct logins.

For a company that has smartly built a services strategy with privacy as a selling point, forcing developers to adopt privacy-oriented options could be seen as doubling down on that stance. On the other hand, developers may not want to add Apple‘s SSO because they are prevented from accessing any useful customer data.

At the same time, the development also highlights the power Apple wields over the App Store. Of course, the tech giant owns the platform, and it’s free to make the rules and change it anytime it suits them. There’s no denying this tight control pushes app developers to meet certain quality, security, and privacy standards.

Viewed in that light, Apple’s identity management solution is better for privacy, and the company is doing everything it can to ensure that the solution gains traction by leveraging its control of the App Store.

Yet, this is exactly the kind of monopolistic concern that senator Elizabeth Warren raised in an interview with The Verge earlier this year: “Either they run the platform or they play in the store. They don’t get to do both at the same time.”

What’s more, this requirement was revealed on the same day as reports emerged that the US Justice Department has been granted authority to investigate Apple for potential antitrust violations. Talk about bad timing.

For now, the SSO feature is still in beta. But it won’t be long before every developer has to onboard “Sign in with Apple” if they want to make their apps available on the App Store.

Apple‘s persistent efforts to safeguard user privacy are appreciable. However, it’s fair to wonder if developers would want to cede control to a company that already decides the rules for them.