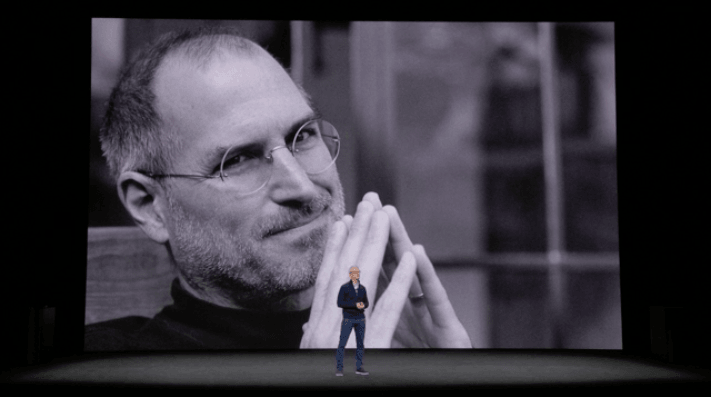 Many analysts thought Amazon would get there first, but the house that Jobs built beat out both Bezos’ marketplace and Google’s AI, proving once and for all that putting a lowercase “i” in front of the word pod was truly a trillion dollar idea.

But it wasn’t always poised to end up on top. 21 years ago this week Microsoft, with 41-year-old Bill Gates at the helm, bailed Apple out with an investment in the amount of $150 million. Essentially, the progenitor of the Macintosh conceded defeat in the great PC versus Mac battle, a dark day for Apple’s fans. Without Microsoft’s money the journey would have surely ended before the iPod or iPhone were ever invented.

Apple CEO Steve Jobs made the bitter announcement on stage at the now infamous MacWorld event in Boston. And Gates joined him live via satellite, his visage projected larger than life on the screen looming over Jobs.

No-one could have known that Microsoft’s millions would be the catalyst for Apple’s complete resurgence. Now, as the most valuable publicly traded company in the US, the rich and often shocking story of Apple is no longer on the verge of ending – it may be just getting started.

Today, we can also partially credit the Trump administration’s incredibly business-friendly legislative moves, which allowed Apple to reclaim tens of billions in international funds being held outside of the US without paying taxes. This move pushed the magic number up to $207, which is one of the reasons analysts thought Amazon would hit a trillion first, but we should know better than to count Apple out at this point.

Because, despite the help its had over the years, the real reason Apple stands where it does today is because ingenuity will always be in vogue. The iPod revolutionized the way we listen to music, the iPhone changed how we use our phones, and perfecting those recipes has been incredibly lucrative for the company.

Congratulations on becoming the first publicly traded US company to be valued at over $1 trillion Apple!

Read next: Review: The Surface Go is officially my favorite PC