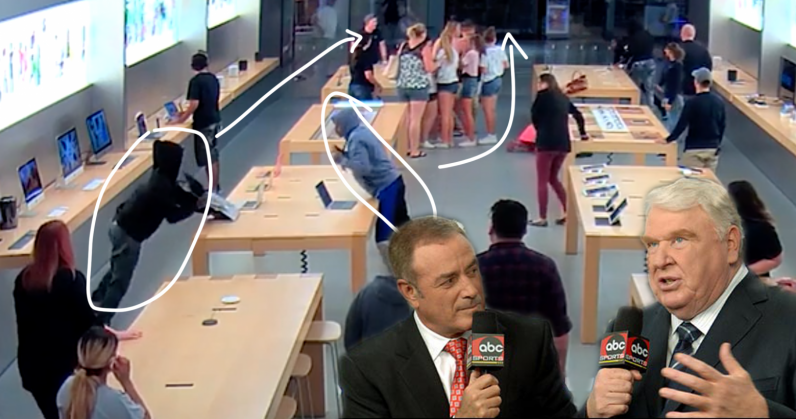 A group of four seemingly unarmed bandits made off with more than $27,000 worth of Apple merchandise in just seconds.

After obscuring their faces with hooded sweatshirts, the group of four individuals rushed the Apple Store inside Fashion Fair Mall in Fresno, California. The group acted quickly, gathering display devices and severing the tethers that attached them to the tables before exiting the store, and knocking a man trying to block their exit to the ground.

All told, the heist lasted less than 60 seconds.

Police believe the thieves made off with a total of 26 pricy Apple products, including several laptops, and various models of iPhone: including the 6, 7, 8, and X.

The suspects are believed to be four or five black males between 16 and 18 years old, and may be connected to a similar Apple Store robbery in San Luis Obispo, California on June 21.

The fifth male, police believe, wasn’t seen in the video and acted as the crew’s getaway driver

There are other reports of other places, other cities in California, that have had these kinds of takeover thefts. So we are looking into [this crime] being connected to other crimes, at any other Apple Stores outside of Fresno.

It’s crazy, but still nowhere near the craziest thing we’ve seen happen in an Apple store. That honor belongs to a French man who calmly walked into an Apple store before destroying everything with a steel ball.

Read next: Instagram's new Questions stickers make it easy to get recommendations