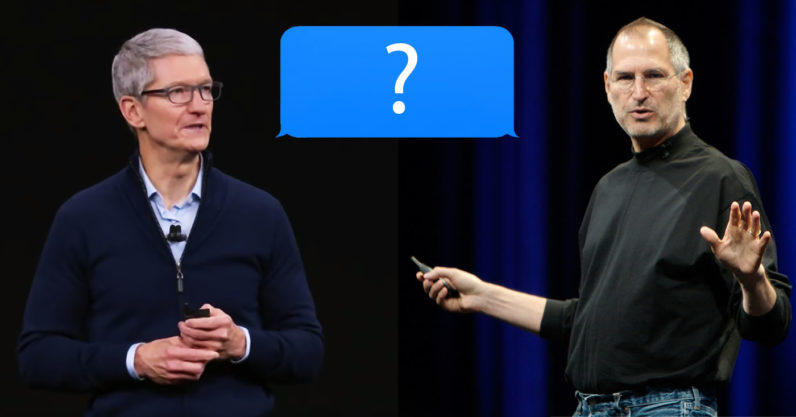 Apple has tried its best to channel Steve Jobs’ showmanship during its recent presentations, as seen during the company’s recent iPhone X launch. But perhaps it goes deeper than that: an AI speech analyzer thinks Steve Jobs and Tim Cook actually have the same speechwriter.

There’s plenty of reason to doubt the claim, but it’s an interesting finding nonetheless. The AI, called Emma, was created by the developers of Unicheck, a site for detecting plagiarism in college papers and such. Emma uses self-learning algorithms based on natural language processing to analyze a writer’s style, and the site’s press kit claims Emma has been tested to 85 percent accuracy.

It works simply enough. You feed the AI 5,000 words to analyze a writer’s style. Once that’s done, you only need to upload 200 different words to determine if they were written by the same person or not. Emma’s team plugged in Steve Jobs’ 2005 Stanford commencement speech and iPhone 4 keynote, and compared it to Tim Cook’s 2016 iPhone Event, his WWDC 2017 presentation, and this week’s iPhone X event.

For the first two, the AI was ‘100 percent’ sure they were written by the same person. For this week’s iPhone event, the AI was 86 percent sure.

That would be a pretty cool finding if true, but there’s reason to be skeptical. Jobs was known to have asked for help from screenwriter Aaron Sorkin for the Stanford speech, but Sorkin says he only “fixed a couple of typos.” Apple execs have definitely had speech writers in the past, but Jobs’ official biography suggests that he had always written his own presentations. Unless the biography is wrong, something changed starting with the Stanford speech, or Jobs has become a literal ghost writer, the pieces don’t quite add up.

More importantly, the AI just doesn’t get it right all the time. I plugged in 5,000 of my own words and compared them to TNW’s other writers, and the AI was correct around 80 percent of the time. That’s in line with the company’s accuracy claim, but notably, the AI always thought my colleague Abhimanyu Goshal’s pieces were my own – in one case with ‘100 percent’ certainty. Incidentally, Abhi and I tend to cover the most similar topics.

While my preferred explanation is that Siri is an ancient AI that has been writing Apple’s speeches all along, my guess is Apple has simply done its best to maintain Steve Jobs’ style and spirit. After all, Jobs’ keynotes had the power to define entire generations of technology; there’s a reason the Steve Jobs movie – written by Sorkin, by the way – is structured to take place during three product launches. Like they say – if it ain’t broke, don’t fix it.

Read next: How tech companies helped during Hurricanes Harvey and Irma