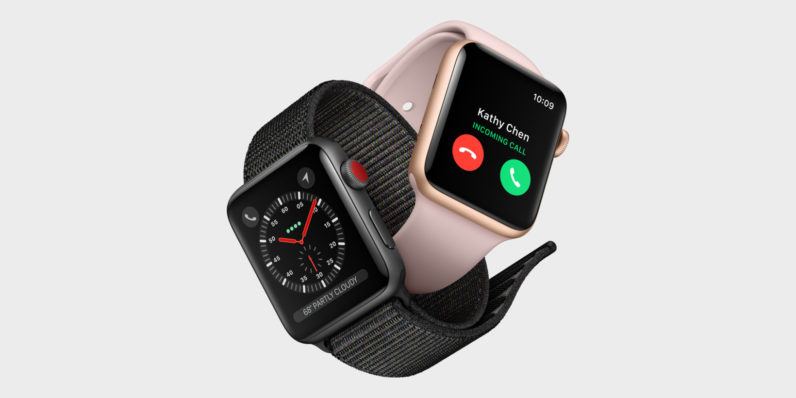 The first major product announcement Apple was proud to make at its new Steve Jobs Theater last night was the Apple Watch Series 3, which features a better processor, a swimproof body and cellular connectivity thanks to an embedded SIM card.

That means you can use it without your phone to receive notifications, receive calls, monitor your heart rate and stream music. While I didn’t care for the original Apple Watch or its successor, I definitely don’t want this one in my life.

I should point out that a SIM card-less option is also available at a slightly cheaper price – but that’s not the point of this post. The major innovation Apple touted with its announcement is cellular connectivity, and that’s largely the cause of my issues with the Series 3.

LTE support is certainly a big deal for the Apple Watch, and the company’s ability to miniaturize all those components into a wearable that’s the same size as the previous model is commendable. But the Series 3 brings along the same issues that plague most smartwatches, and that’s why I’m not jumping over turnstiles to get my hands on this device.

Let’s start with battery life. Apple proudly proclaimed that even with its new features, the Series 3 manages a full day on a single charge. Sorry, but that simply doesn’t cut it for a non-essential personal device.

If it’s not your primary communication tool, you shouldn’t have to worry every day about whether that gadget has some juice left. Ideally, its battery should last long enough that forgetting to charge every day shouldn’t hinder your usage.

That’s the case with now-defunct Pebbles and with my recent favorite, the What? Calendar Watch (which lasts several weeks on a charge). With those, I’d merely charge them whenever I took them off for a shower or when I switched to a different watch at some point in the week for a special occasion. Having to charge that rarely meant that I could easily travel with those timepieces on my wrist, while leaving the watches’ proprietary chargers at home so I didn’t have to worry about losing them.

You’d be right to point out that those two devices are very different from the Apple Watch – and you might want to cut the Series 3 some slack because it’s got a cellular connection. But if you’re at all concerned about how much use you’ll actually get out of a device, it’s important to consider whether it’s ready to leave the house when you do.

Call me maybe (not)

When I step out without my phone, it’s almost always because I want to cut loose from all the distractions my phone exposes me to.

I’ve written before about how I don’t enjoy my watch vibrating a couple of hundred times a day to alert me of new messages and email, particularly when it’s not the best tool for replying to them.

If you hope to be more discreet wearing a smartwatch when out with company than whipping out your phone, I’ve got news for you: it doesn’t work that way. You’ll end up glancing away from your companions just as often as you would with your phone beeping on the table, and perhaps staring at your watch’s tiny screen more than you would with a handset.

On to calls: Apple deserves props for building in some sort of far-field mic tech that negates the need to hold up the watch to your face to speak to and hear people on a call. But is it really a game-changer, if the game has already changed?

I make far fewer calls these days than I did a couple of years ago; I even use Truecaller to identify and screen unknown numbers, and frequently tackle incoming calls with a canned text message that reads, ‘Sorry I can’t talk just now, what’s up?’

I’m simply not in the market for a tinier phone that I can wear on my wrist and use to answer calls. The only draw for me that the Series 3’s cellular connectivity holds is the ability to stream music on the go – not voice-based communication.

On a more personal note – I’ve never really cared for the look of the Apple Watch, and at this point, I’m really tired of seeing its chunky profile. It doesn’t appeal to me as a fashion accessory to pair with my outfits, and as such, one of the most crucial arguments for buying this watch is quickly lost.

Naturally, not everyone will relate to these concerns. In fact, if you’re a fitness enthusiast, you should probably strongly consider the Series 3 for its workout routines, the built-in altimeter for climbing exercises, as well as its heart activity monitoring and water resistance. It’s a bit pricey at $400 for the cellular-capable model, but it does everything most health trackers do, and then some.

I guess I’m just surprised that it’s taking Apple so long to make me want one of its products. Granted, I’m a tiny bit of a watch nerd at this point and I don’t see the value in a connected wearable – but every one of Apple’s customers has biases just like I do, and the company is usually good at changing people’s minds. Even with the third iteration of its Watch, it seems to be falling short.

Ah well, at least I can keep my imaginary spare $400 in my pocket for at least another year.

Read next: Closing tabs is the only way to keep Tabagotchi alive