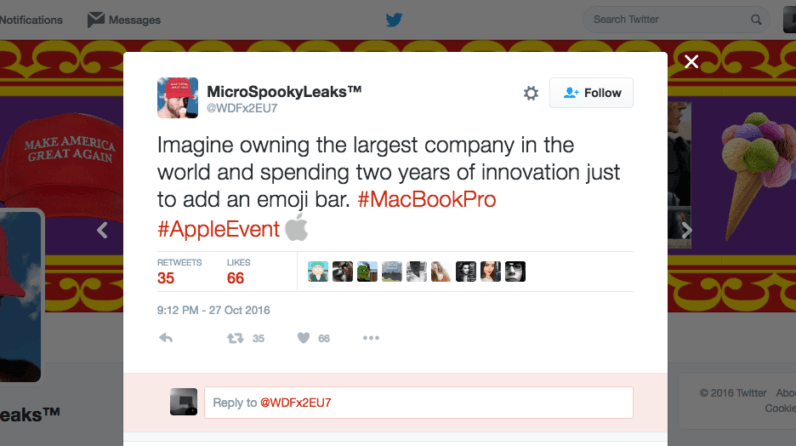 It’s a big day for Apple. The tech giant just announced the new and improved MacBook Pro at its event in Cupertino – and Twitter didn’t stay silent.

As is often the case with these events, tonight’s keynote quickly became the hottest point of discussion in the Twitterverse, inspiring a barrage of hilarious reactions.

So without further ado, here are some of the best reaction tweets from Apple’s October 2016 Keynote:

“And we’re calling it ‘TV’…” #AppleEvent

Yo, dawg… we heard you like TV, so we put a TV app on your #AppleTV! #AppleEvent #HelloAgain

There is one guy who keeps clapping like 1/2 a second too early. It is making me feel weird. #appleevent

People dying for a new Mac be like… #AppleEvent pic.twitter.com/AHTo8BO3fJ

When they finally get to the laptops #appleevent pic.twitter.com/9g2ih272Xa

… while others were there just for the jokes.

“The Mac. Today we’re introducing something revolutionary, new, & unheard of.

Countdown to someone trying to charge their MBP faster by plugging power adapters into all four ports. #AppleEvent

Who wore it better? #appleevent pic.twitter.com/JbnO0iISff

Jony Ive is a over paid voice over actor #appleevent

Touch bar? What kind of name is that ?! #appleevent

But, how the Hell do you turn it on, Phil? #AppleEvent

"And around lunch time, the Touchbar conveniently turns into a salad bar." #appleevent

… but few were quick to figure it out.

You just know someone is going to find a way to put ads on that touch bar. Somehow. #appleevent

Everybody hates the DJ

Please… No one ever DJ with your #TouchBar. I beg you. #appleevent

Tell me more about how the DJ killed it, Mr 56 year old executive. #AppleEvent

Theory: the smoke in the #appleevent logo is coming from an exploding Galaxy Note 7.

What are some of the funniest things you noticed about tonight’s Apple Keynote? Let us know down in the comments.

Read next: New MacBook Pro can't connect to your iPhone without a dongle or new cable