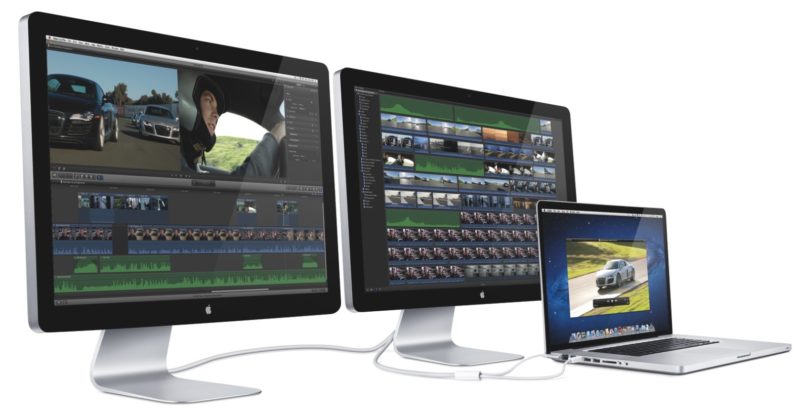 Pundits believe Apple is working hard on a new ‘Thunderbolt’ monitor, and much of the focus is on the possibility there will be a GPU buried in the hardware. I think there’s a much different (and more colorful) reason Apple is refreshing its monitor.

Late last week, Apple announced it was letting the current Thunderbolt display die on the vine. You can still buy one — and they’re still $1,000 — but stock won’t be replenished.

As with any move Apple makes, speculation abounds! The Thunderbolt display is seriously long in the tooth, so it’s not a surprise we’re seeing it vanish — but why now?

Some speculate a GPU will be added to the display hardware, which has a lot of purpose, especially as it applies to gaming. It’s especially exciting to think Apple may have different monitor options with several GPUs available to suit your needs (and how much you can afford).

It’s obviously not clear how this all may work, but one thing is likely a safe bet: you likely won’t be able to go all iFixIt on your next Thunderbolt display and replace the GPU yourself. Apple’s been hard at work to keep its hardware completely integrated on the iMac and MacBook — and there’s no reason to think a Thunderbolt display would break from that.

While everyone is excited about a new monitor and a GPU, I think there’s a much more grounded reason Apple is refreshing its display hardware: P3.

The P3 color gamut is one Apple is big on, and once you see it — you can’t un-see it. It goes well beyond the standard sRGB spectrum and specifically makes greens and blues pop.

Side note: Apple provided me with an iMac for review late last year, and the display is what I miss most. It’s really that special.

Apple says P3 brings about 25 percent more color to your display, which is especially handy when editing photos or doing other visual design work. Here’s how it’s described on the iMac landing page:

This is achieved by shifting the Retina display away from standard white LEDs to advanced red-green phosphor LEDs. Now all three colors — red, green, and blue — are more equally represented and show off real-world color with more balance and precision.

Most good cameras can capture colors our monitors just can’t display, which is why Apple thinks P3 is a winner; it can show those colors.

At WWDC, a session named ‘Working With Wide Color’ dug deep into how and why developers want to use P3 assets.

In that session, Apple quietly detailed just how P3 was the future of iOS and macOS; if you have a 16GB P3 asset in a library, the compiler will even color match and dither it to an 8GB sRGB file for older devices. Essentially, designers and developers can go bleeding-edge on visual assets without fearing they’ll leave legacy devices (and displays) behind.

There are even new APIs for dealing with Wide Color in apps; in a nutshell, developers can now go beyond the values in the sRGB color gamut they’re used to accessing on a code level (Apple simply calls it ‘Extended Range sRGB’ for simplicity).

Initially, P3 struck me as something that was just really cool for the iMac. Now it seems as though Apple is just really serious about making it standard across devices, and the iMac was just the most natural place to start.

And really, we should be thinking beyond the iMac. Many of us have Macs (you know, the trash can) with Thunderbolt displays hooked up, and I’d like to think a whole lot of those that do are developers and designers who need P3 a bit more than the rest of us.

With the new APIs, we should also be considering that P3 will find its way to iPhones and iPads, too — especially if talk of new camera assemblies are accurate.

Some speculate that Apple is working on iPhone cameras that rival standalone DSLRs, especially in low-light situations. There are also some really powerful image editors on iOS that could take advantage of what P3 offers (hi, Pixelmator) if you don’t snap pictures with your iPhone.

Of course, I’m also speculating as to why the Thunderbolt display is fading away — I just think my reasoning is a bit more grounded than flashy GPUs.

It could be that Apple is just unhappy with the Thunderbolt’s old-school design, or that it simply wants to update its Thunderbolt connection (and make it work with USB-C). Apple could also be getting away from making standalone displays, but that’s the least likely reason.

We obviously won’t know until Apple tells us, but if we see P3 on the new Thunderbolt, consider it the new standard moving forward and not just a cute new feature on the iMac.

Read next: India's $4 smartphone will begin shipping next week