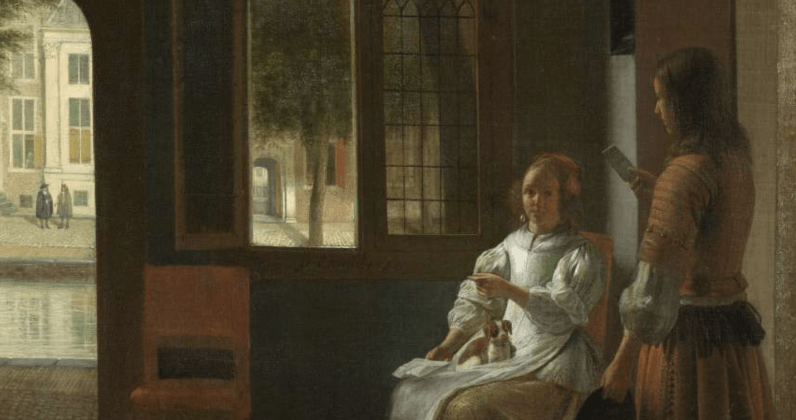 This morning I attended an interview with Apple CEO Tim Cook at Startup Fest Europe in Amsterdam.

Tim said lots of things, which we all already knew, but he also started off with an interesting anecdote, which is cute enough to share with you.

He was being accompanied by the former European Commissioner for Digital Agenda, Neelie Kroes, to the Rijksmuseum in Amsterdam the evening before.

As Neelie Kroes told the story:

At one point Tim rushes over and tells me ‘Come take a look, I found a painting with an iPhone on it!’ So he takes my arm and shows me a Rembrandt with a person seemingly holding an iPhone…

Tim Cook finished the story, saying “I always thought I knew when the iPhone was invented, but now I’m not so sure anymore.”

Neelie then showed the audience a photo she took with her iPhone, which was blurry, and even Tim Cook had to admit you couldn’t really see it on the screen, which made the story less cool.

But I figured I’d go home and find that painting real quick. I browsed to the Rijksmuseum site and entered ‘Rembrandt’ and hit ‘Search.’

After going through 2,304 Rembrandts (spread over 192 pages), I ended up doing an image search for my photo of a screenshot showing the photo:

And that’s how I found it wasn’t a Rembrandt at all.

It was a Pieter de Hooch, painted in 1670, titled ‘Man Handing a Letter to a Woman in the Entrance Hall of a House‘.

Read that title again and now look at the painting:

As you can see there are several things wrong with that title. I’m pretty sure guys weren’t wearing skirts and high heels in that time, and that isn’t a letter but an iPhone 6 gold.

My guess is she’s shooting a video. Probably Snapchat. What do you think?

Read next: Are you stupid for still falling for phishing attacks?