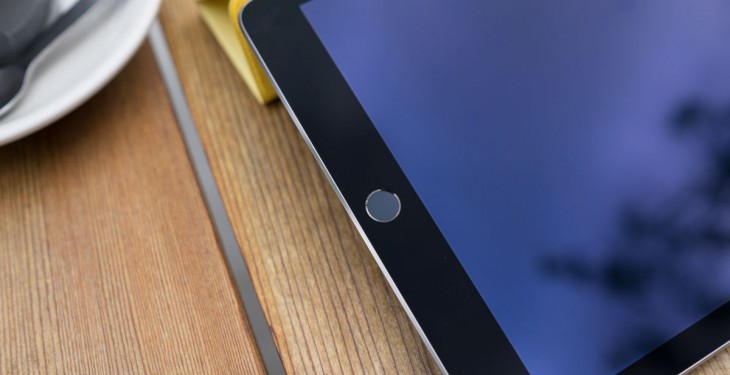 I’ve had a troubled history with the iPad; friends that own the device have always sung praises of the iPad for how it changed their life, but I never got it. That’s finally changed with the iPad Air 2.

When Apple announced the iPad Air 2, it sounded intriguing. Lighter and thinner was enough to catch my eye, but with an improved display and the addition of Touch ID? It sounded too good to be true.

The iPad Air continues to be stunning; enough to make you want to pick it up all the time. But picking it up is the surprising part — especially the first time — because it’s incredibly light. The absence of weight is enough to shock you the first time you take it out of the box or try it in the store, especially considering the physical size of the device.

The iPad Air 2 is just 6.1 mm thick, a 1.4mm drop from last year’s model, and it weighs in at 437g, a drop from 469g last year. It’s not a huge improvement over last year’s iPad, but still marks Apple’s endless march toward thinner and lighter.

When you’re talking about a 106g difference in weight over the iPad mini 2, for two extra inches of screen it’s impressive. Apple has nailed the perfect balance of thinness and weight.

A year after its original introduction, the addition of Touch ID here makes the iPad finally match the feel of using an iPhone. My biggest gripe previously was coming from an iPhone, I always instinctively tried to unlock it with my thumb before realizing that it didn’t work.

Touch ID makes picking it up and surfing or checking email that much smoother, as well as looking great on the front of the device.

This is my favorite thing about the iPad Air 2. The display is the best I’ve ever seen on a tablet (or even phone); even Apple’s hyperbole in its marketing can’t do it justice.

To get the new iPad so thin, Apple had to fuse the cover glass, touch sensor and LCD into a single layer. This is immediately apparent when using the device; colors are vibrant, images look incredible and everything is so sharp that it looks like it’s printed on.

The same ‘laminated display’ method has been used on the iPhone for a number of years. This said, the iPad’s display appears much nicer in practice (at least, to me; on paper it’s got the same color gamut as previous iPads).

The iPad Air 2 has a 264ppi display, while the iPhone 6 Plus sports a 401ppi display. The difference isn’t enough to bother you, but things on the iPad do seem a little zoomed in comparatively.

Apple’s claim that the device is less reflective than the last iPad Air stack up, too. Using the iPad Air 2 in direct sunlight is entirely reasonable; I read a number of books in the bright sunlight found at Delores Park, San Francisco with no issue.

The one thing I hold hope that Apple can find a solution for is just how many fingerprints cling to displays; iPads seem to attract them more than any other devices I own.

I’ve finally come to terms with the fact that people are going to use the iPad for photos. All the time. I don’t think it’s possible to go to a National Park and not see at least one person using their full-sized iPad for pictures. I’m starting to understand why.

It’s no secret that people — particularly those my parent’s age — love using the iPad to take pictures because you can actually see what you’re shooting and Apple’s well aware of just how popular the iPad has become for shooting pictures, with its huge section on the iPad Air 2 website touting how great the iPad cameras are for… well, everything.

This year’s iPad Air has a very similar camera to the iPhone 6; the 8-megapixel shooter and the very same improved image sensor. The difference is you get f2.4 instead of f2.2 found on the iPhone 6 and none of the awesome ‘focus pixel’ technology in the new iPhones.

Last month, I raved about the iPhone 6’s camera in my review of the new iPhone; it’s simply the best smartphone camera on the market and the iPad Air 2 comes incredibly close to matching it. Often to the point of not being able to tell the difference.

The iPad sporting a great camera sweetens the deal. It’s certainly not the first device I think of to shoot pictures on, but it’s incredibly handy to have a great camera on a tablet for two big reasons; that epic battery life and using the iPad as giant viewfinder.

I’ve included a few sample pictures that compare the iPad Air 2 to the iPhone 6. They’re so similar that there’s not that much to say, other than that Apple’s done the right thing by putting the same camera in the iPad. 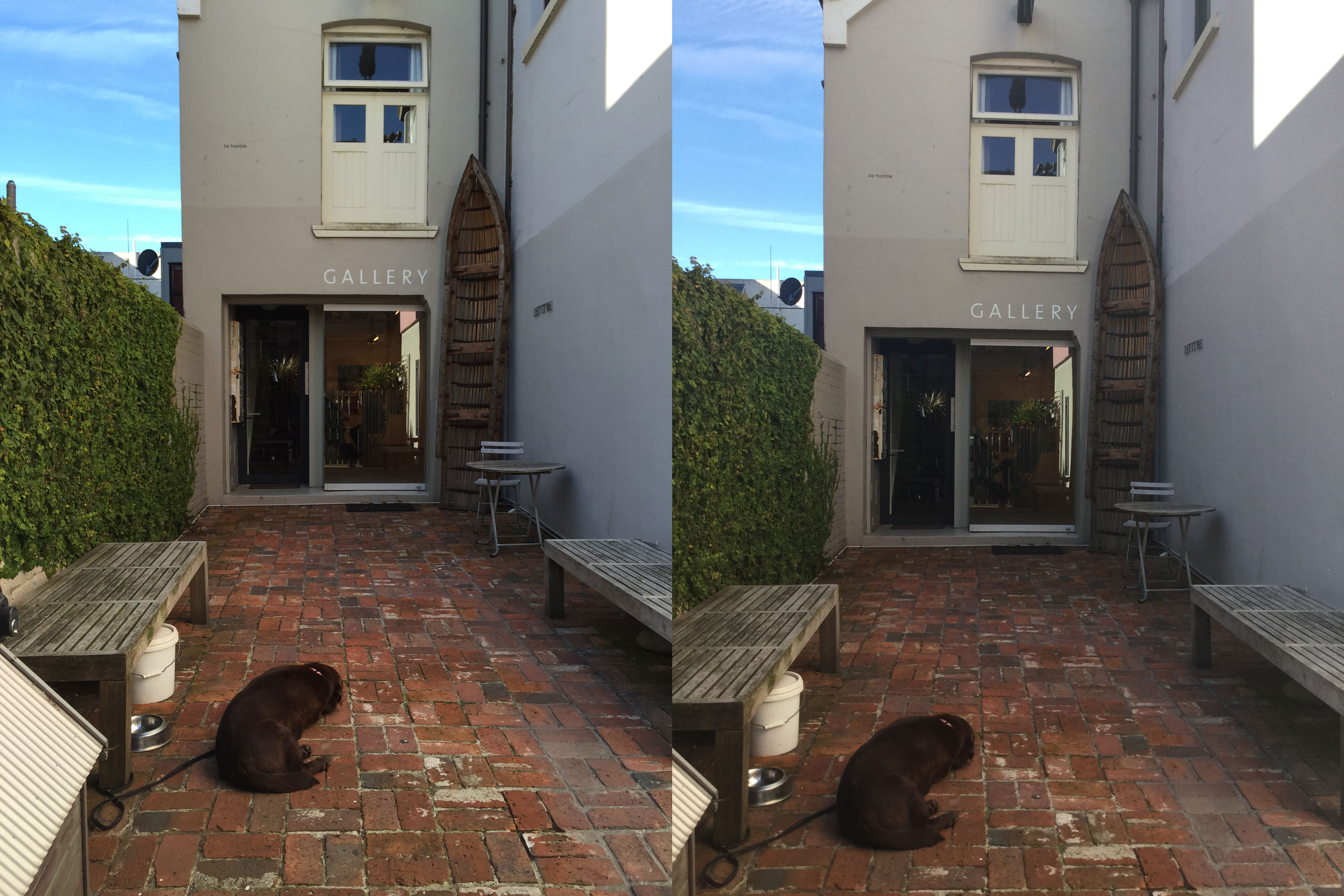 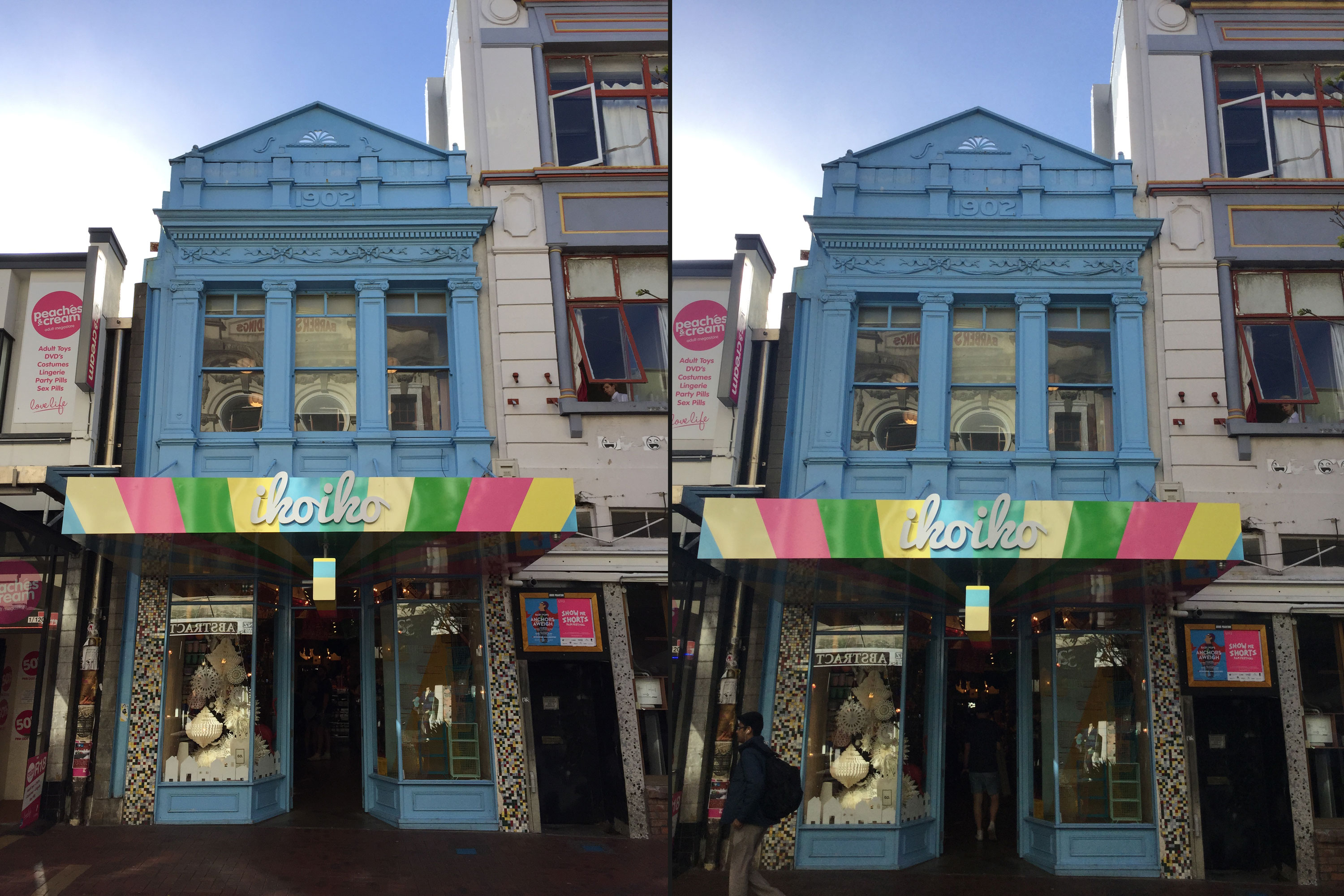 iPhone 6 on left, iPad Air 2 on right. Click to enlarge.

There isn’t much that hasn’t already been said about iOS 8; it’s a big release for the company that adds a number of great new features.

Perhaps the one big feature that makes the iPad significantly more useful than previously is Continuity; I was surprised by how much I used Handoff to finish off an email I had half-written on the iPad or to quickly jump to Messages on my Mac when writing something longer. I can’t wait for more apps to support it.

Continuity shows just why Apple hasn’t needed to adapt OS X to run on tablets; if you integrate the experience well enough across platforms there is simply no need to try and mash desktop functions and tablet functions onto the same device as Microsoft continues to attempt to.

The bad news is that while the pump seems primed for Apple to unleash multitasking support on the iPad, especially after a report showed that iOS 8 is secretly optimized to run two apps alongside one another, the company still hasn’t made any moves to implement it.

Windows 8 has been able to do this for two years and while not perfect, it makes the feature seem sorely missing from the iPad.

On a daily basis I wanted the feature, particularly for keeping up with Twitter while browsing the web or watching a video. Even basic multitasking for this kind of function would be incredibly useful to me and increase the iPad’s utility tenfold. I expect it’ll happen, eventually, but in the meantime it continues to disappoint me.

I’d also like to see multiple user support in the future, but it’s unlikely this will happen while Apple still ships the 16 GB iPad. Multiple user support would make it much more useful around the house and would mean that instead of needing two devices for myself and my partner, we might be able to share one.

My final complaint about the iPad is that after using the iPhone 6 Plus with its higher resoluton Retina display, the iPad interface feels like everything is zoomed in a little too much. It feels like the home screen could be scaled down a little, alongside the interface in many apps. It’s not frustrating, but simply seems inconsistent when switching between the two.

It’s not like I hadn’t tried with previous versions of the iPad. I owned the iPad 3 before eventually selling it after it gathered dust. I still have the iPad Mini 2, which lives in a drawer somewhere now that I use the iPhone 6 Plus.

The iPad Air 2, however, has changed my perspective on using the iPad. I’m now an avid, daily user; it’s the perfect device for around the house, at a cafe or when traveling overseas.

I prefer it over a Windows based tablet because it’s low-hassle, easily maintained and completely frictionless to use. The beauty of the iPad is that it’s great at simply getting a job done.

I have a Mac for performing PC tasks, I don’t need a device that can be a tablet and a PC but only half as good as two dedicated devices would. I see the iPad as continuing to be relevant in the future, because Apple has managed to build a tight experience while keeping Mac and iPad separate.

This year’s iPad Air is the first time I truly ‘get’ the iPad; Apple has finally nailed the right hardware and software combination to make it a device that fits into my workflow with no hassle.

Read next: Microsoft Azure is suffering a widespread outage; Xbox Live is partially down [Update: It's back!]