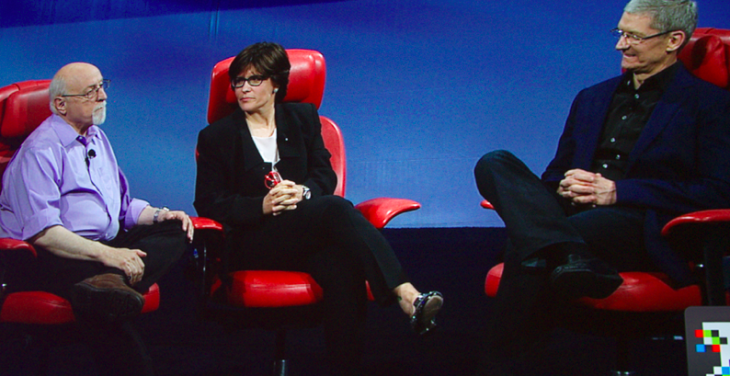 Today at the All Things D conference in Palos Verdes, California, Apple CEO Tim Cook answered Walt Mossberg’s first question by saying that no, Apple was not in trouble.

“We’re a product company,” said Cook in response to Mossberg’s accusation that Apple could be ‘losing its cool’. Cook said that surveys showed that people loved the iPhone and iPad.

“The usage shares show that people love these devices,” Cook said, referring to the fact that metrics display much higher usage of Apple’s devices than those of competitors. “We have a much smaller market share,” Cook said, “at least we think so because other people don’t report them like we do.”

“We’ve always had competent rivals,” said Cook. “In the long arc of time, people change their mind on companies, but we’ve always suited up and fought. I don’t see that different today than I did…15 years ago. Apple as always had competition to focus on. But our North Star always comes back to making the best products. I think we’re doing that.”

Cook was then grilled by Kara Swisher about the price of the stock, which has fallen precipitously. Cook agreed that the stock falling was frustrating, but said that this wasn’t out of the ordinary, pointing to times in the early 2000’s and late 90’s.

“If we make great products that enrich people’s lives, then the other things will happen,” Cook said with regards to how the stock might react to its new products.

Mossberg then quizzed Cook about whether or not Apple was still a company that could deliver game changing products. Cook responded that ‘we have several more game changers in us’.

“Globally, there’s probably a lot of phones called smartphones, that if you and I were labeling them we would call them feature phones. I think that there are some devices that were bought and just aren’t being used,” Cook said. “The iPad is a significant percentage of my computing use now…I don’t hear that from Android tablet users.”

Cook used three pillars to support the fact that it was in fact doing fine outside of pure market share. One was e-commerce. Then usage, as above. The third was customer satisfaction.

“Ultimately, the customer is the judge…the iPhone has the highest customer sat[isfaction] of any phone. We’re about enriching customer’s lives.”

Cook also added that he wasn’t worried about the demographics of its customers, saying that “we want customers of all ages, we try to appeal to everyone.”