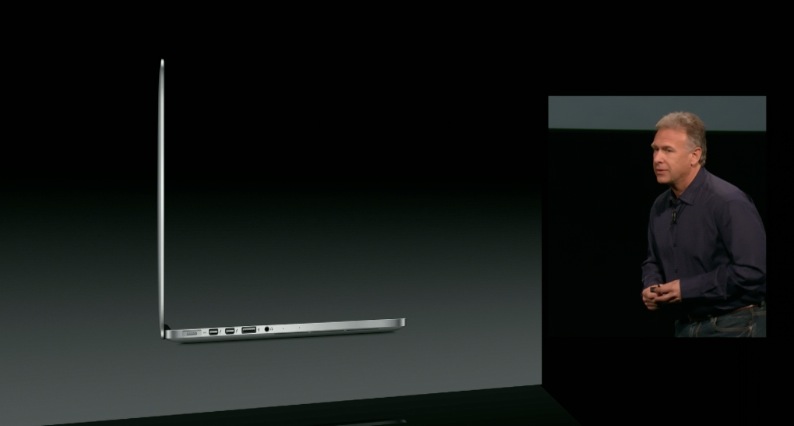 Diving deeper into the specs, the 13″ MacBook Pro also packs a 720p FaceTime HD camera, as well as dual microphones and stereo speakers that Apple claims “sound better than the previous generation.” The new MacBook Pro, of course, features the standard backlit keyboard and a glass Multi-Touch trackpad.

As shown in the image below, Apple uses asymmetric Lithium Ion batteries in the new device. You’ll also notice that you can choose either a dual core i5 or i7 processor, with 8gb of RAM and 768GB flash memory. The new 13″ Macbook Pro can be configured with up to 768 gigabytes of flash storage.

Apple’s Phil Schiller also touted the environmental-friendliness of the new MacBook Pro 13″, saying that it was rated Energy Star 5.2, EPEAT Gold, arsenic, mercury, BFR and PVC-free. While this is somewhat standard for Apple, it’s good to see the company continuing its focus on sustainability.

This machine ships today and we can’t help but believe that it’s going to be a hit. The previous 13″ Macbook Pro was the most popular Macbook (and Mac) in general.

The new Retina 13″ MacBook Pro may not manage to squeeze out the the cheaper Macbook Pro given its higher price, but it will likely sell well as a higher-end option. Learn more here.