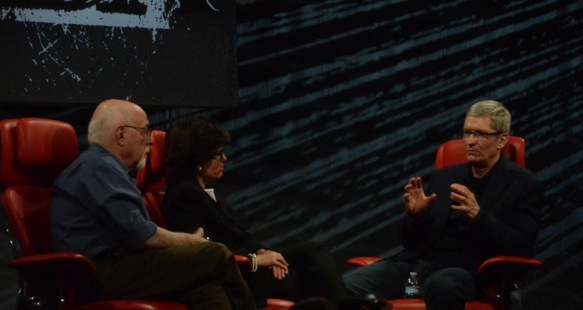 Apple CEO Tim Cook spoke at the All Things D Conference today in Rancho Palos Verdes, California. A variety of issues were covered, but one of the major components was discussion of the Apple TV.

Cook said that Apple was on track to double sales of the Apple TV this year and had sold some 2.7M so far, with only 2.8M sold all year last year.

Cook said that staying in the Apple TV market was uncharacteristic for Apple. ” We’re not a hobby kind of company as you know. Our tendency is to do very few things. And, if something creeps in and isn’t a big success, we get it out of the way and put our energies on something else.

“With Apple TV though, you see what we’ve done. We’ve stuck in this, it’s not the fifth leg of the stool. It’s not the same size as the iPhone or Mac or tablet business. But last year we sold a little less than three million Apple TVs.”

Cook said that the Apple TV was an ‘area of intense interest’ for the company. When outright queried by moderator Walt Mossberg whether Apple was going to make a TV product, Cook said that he would not answer the question.

When pressed for a hypothetical answer to the question of whether Apple would make a TV product, Cook said that there were certain questions that the company asks itself about any new product category including “can we control the tech?”, “can we make a contribution in this area?” and “can we make a product that we would want?”

Mossberg followed that up by telling Cook that Apple was ‘not doing everything it could do’ when it came to making it easy to consume media on the TV. Cook said “I agree.”

Cook said that Apple had a level of trust with content creators in Hollywood, and that he has had meetings with them recently to see what more they can do together, but said that Apple itself does not need to own a content business. This is in contrast to other streaming services like YouTube or Netflix, which are experimenting with creating their own programming.

Read next: Tim Cook: Smartphone revolution is in the early stages, will be a 1B unit market in 3 years