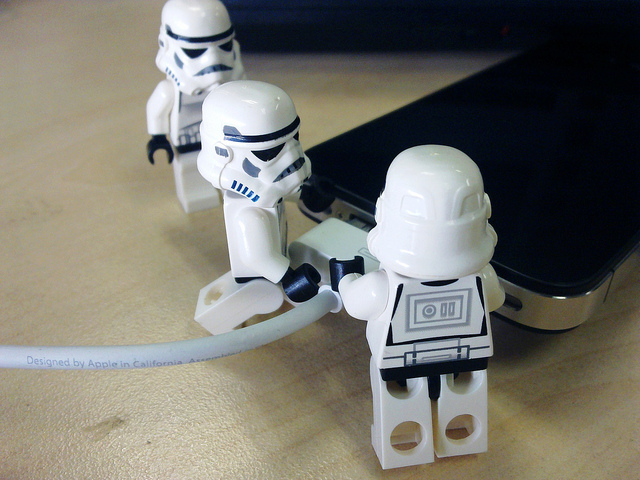 Owners of Apple’s iPhone are now more data hungry than any other smartphone users, eclipsing users of Android, BlackBerry and Windows Phone devices, to account for 80% of the top 10% of heaviest data users.

That’s according to a new report from technology research firm Analysys Mason, which examines smartphone trends and data usage of handset owners.

On average, smartphone users who rank amongst the 70th percentile in terms of data usage, it’s the iPhone that stands out. In fact, the Apple smartphone appears more than three times as often as HTC Android handset owners, an impressive figure when you consider the openness of the Android platform and its ability send and receive data more frequently than its smartphone counterpart.

Also, many Android devices are now 4G-enabled, something that Apple only offers to owners of its new iPad in the US.

Analysys Mason’s data is derived from an on-device tracker who monitors the smartphone behaviour of more than 1000 smartphone owners across the USA, UK, France, Germany and Spain. While the sample is small in terms of the millions of smartphone users out there, it provides a differing insight into how iPhone users operate their devices.

When it comes to excessive mobile data usage or broadband downloads, it is often a small minority that accounts for the majority of data transferred. From its findings, Analysys Mason recorded the average data traffic levels of its high-usage panellists, standing at 807MB — nearly four times as much as normal data users with 221MB.

In the USA, 30% of consumers used more than 500MB of cellular data per month, compared with 13% in France and the UK, and only 8% in Germany.

Why the heavy iPhone use?

Apple introduced its new voice-activated assistant Siri to the iPhone 4S last October, a tool that polls a number of third-party services to find answers to requests and provide information for device owners. Each request is transferred to Apple’s servers and relevant information sent back, utilising 3G data connections when a user is on the go.

iPhone 4S owners are said to use three times more data than the owner of an iPhone 3G, according to Ariseo.

However, Siri isn’t going to account for a large amount of data on its own.

You could argue that the explosion in online video viewing and rapid uptake of online music streaming services could contribute to heavy downloads, but those same apps are also available on Android devices.

Sprint CEO Dan Hesse stated in a recent interview that iPhone users are more profitable for the carrier because they use less data than Android users:

“iPhone customers have a lower level of churn, and they actually use less data on average than a high-end, 4G Android device,” said the executive. “So from a cost point of view and a customer lifetime value perspective…they’re more profitable than the average smartphone customer.”

Analsys Mason says that 45% of panellists used third-party instant messaging services over the top of their SMS and email services, relying on data services instead of an SMS allowance to send text, images and other files to their friends and family.

Carriers in Europe are offering unlimited data plans to get smartphone (but also iPhone) owners on board, which could be spurring the excessive data usage in the top 10% of users.

However, Analsys Mason isn’t quite clear on what is causing the sharp rise in iPhone data downloads.

With less of an always-on nature than Android, it’s quite surprising that very heavy data users are sporting an iPhone, suggesting the rich media experience Apple has presented to users is proving to be a hit.