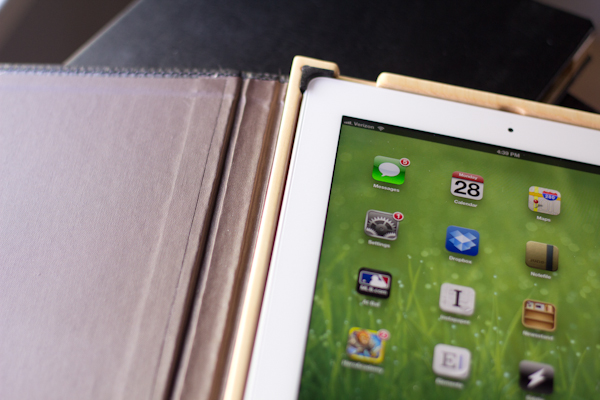 When we last wrote about the Pad & Quill cases for iPad, we were excited about the Contega folio model, which has a built-in easel. This time, we took a look at the newly upgraded Octavo, whose simple folio design has been upgraded to an optional rich leather finish.

The Octavo takes on the familiar folio shape that you’ve seen in a lot of these products. It looks outwardly like a thing hardback book, but opens to reveal the iPad cradled inside. The case is enclosed with an elastic band reminiscent of classic notebooks like the Moleskine. The Octavo has been around for a while, but got an upgrade when P&Q revamped it for the new iPad.

There is still a standard version of the Octavo, but you can now also get it in the Octavo Luxury flavor, which replaces the bonded leather of the standard version with a supple soft-stitched leather cover that upgrades the posh feel of the case significantly. The luxury version takes the folio up a notch to something that you’d feel comfortable carrying in the board room or on stage with no embarrassment.

Not that the standard Octavo doesn’t still look great, but the Luxury version is absolutely gorgeous. The leather is thick and of high quality. The stitching is even, with well chosen thread. The cover of the sample unit we received had the standard unevenness of real leather, showing its character and grain. It scuffs and scratches like leather, but also heals nicely unlike synthetics.

As it’s backed by bindery cloth, there is a soft feeling to it that helps to enhance the leather’s texture. It’s got the same feel of a classic high-end book or a special edition binding offered by publishers like Easton Press or Gryphon Editions.

In addition to the leather Luxury version, the Octavo has also gotten some nice improvements internally. Teh previous system for locking the iPad in place was some leather pads at the corners of the carved wooden frame. In my review of the Contega, I found this to be adequate, but there were some concerns about the longevity of the pads, and just how firmly they held in the tablet.

The Octavo, along with all of the other iPad cases in P&Q’s lineup, has gotten a brand new bumper system which features four semi-hard rubber bumpers at the corners. These secure the iPad much more firmly and provide you with a satisfying ‘locked in’ feel when you pop it in.

The design of the Contega has also gotten one more nice change in that it now uses a stronger magnet in the cover to trigger the iPad’s auto-on function. This is important because a weak magnet in earlier versions of P&Qs cases caused them to trigger the iPad while carrying it in the hand. A slight shifting of the cover caused the iPad to ‘click’ on and off as the magnets moved out of range. New versions of the company’s cases use a stronger magnet, preventing this from happening. I saw no evidence of it when trying out the new Octavo.

All of the other things I loved about the P&Q folio cases initially are still here. A lighter wood frame than many other options and well-cut port openings that allow easy finger access among them. The speaker is also helped enormously by a channel cut to throw the sound forward out of the case, rather than out of the bottom.

If you’re interested in a great folio case for the iPad, then my recommendation for the Contega and Octavo still stand. They just got made better with the bumper and magnet fixes. The addition of the Luxury version of their cases that come equipped with a beautiful leather cover should appeal to anyone who needs a dressed up option for fancier functions.

The Pad & Quill cases remain among the best on the market for Apple’s tablet, and this latest version just makes the Octavo that much better.

Read next: Watch Elon Musk talk about SpaceX over 8 years before the Dragon docked with the Space Station