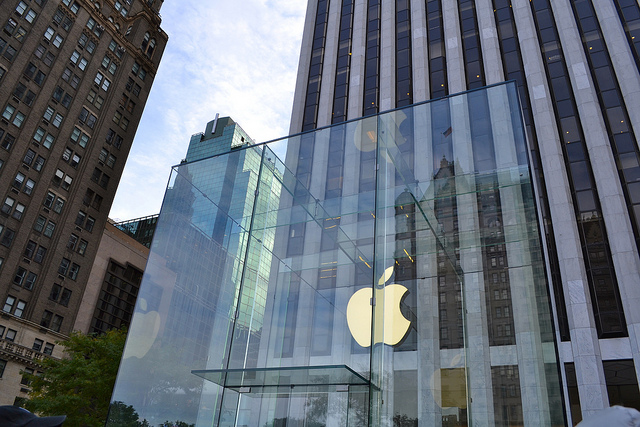 The lure of an Apple Store can be so great that local authorities are doing all they can to sweeten the deal for the world’s biggest technology company, waiving rents and taxes in order to have it set up an Apple Store in their area.

New York’s Grand Central Terminal wanted Apple so bad it dropped its leasing fees and in Salt Lake City, authorities are rumoured to have dropped rents completely, to incentivise the opening of a new Apple Store.

As a business, Apple’s retail stores are booming. In its second financial quarter (ending March 2012), the company saw sales rise by some 90 percent, breaking records with a $24.67 billion in quarterly revenue and $5.99 billion in profits.

A staggering 71 million customers visited Apple’s retail stores between January and March, an increase of 28 million from a year earlier. Apple’s impressive footfall is proving to be a catalyst for retail spending in the areas in which they are located, pushing the money spent back into the local economy.

A recent ABC News report states that Apple is going to open a new store in Salt Lake City, located in City Creek. The company already has one store in the the Utah city but thanks to what appears to be a massive retail incentive, it may open a new store before the end of the year.

What is the big incentive? According to ABC’s sources, City Creek has offered a “major concession package” that is thought to include five years free rent.

What makes Apple so special?

The truth is, realtors and local authorities know that when an Apple Store is opened in an area, tech savvy consumers come from surrounding areas to view products, seek help and spend money on luxury electronics. Put simply, spending will flow into City Creek.

The rental deal isn’t a one-off either.

While authorities will never confirm it — even City Creek’s Marketing Director said it “does not release the terms of its leases” — Apple’s lease for its impressive store in New York’s Grand Central Terminal is a third of that paid by other retailers and restaurants in the area.

In fact, the lease is costing Apple $60 per-square-foot, where other retailers are expected to pay $200 for the same area, and it has escaped having to share any of its revenue with Grand Central’s operator, the Metropolitan Transportation Authority, according to papers obtained by the New York Post.

That restaurant — The Steakhouse — directly attributes its increased footfall to the nearby Apple Store with its other co-owner stating: “The jump only happened after Apple opened.”

Apple is showing no signs of slowing its retail expansion, it’s already seeing an average of 22,000 customers, per store, per week. Of course, it wants to further increase that figure.

As of January 2012, Apple operated 363 stores and has opened a small number since then. In 2012, it has plans to open 40 new stores, including a handful in China, perhaps its most important market.

In order to facilitate this, Apple has allocated $900 million for its new stores, some of which have been confirmed in Germany, Spain, France and Australia.

Apple’s retail success is down in part to its customer service, ease of purchasing, level of detail in its stores — and the quality of its products. However, the company isn’t completely satisfied with its operations, and has brought aboard former Dixons CEO John Browett to drive its retail business forward.

Tim Cook has said that the Dixons exec will bring “Apple to an even higher level of customer service and satisfaction.”

Part of this plan apparently involves automating its sales processes, which includes investment in its ‘Personal Pickup’ service, which allows customers to buy products online and pick them up from their local Apple Store.

Apple also launched a new iOS payment service called EasyPay, providing a simple way for customers to enter an Apple Store and pay for their purchase using their iPhone, without having to seek assistance from a sales clerk.

The company is set to release a new iPhone and update its range of Mac computers in the coming months, no doubt incentivising Apple fans to return to their local store to check them out.

As it stands, the company is setting the standard for retail, with other technology companies — including Microsoft — rushing to open similar stores and build rapport and most importantly gain trust from their customers.

Apple might be benefitting from its success, in terms of the money it saves from leases, but companies in the vicinity of an Apple Store don’t seem to mind. It’s difficult to complain that a company is getting preferential treatment when it helps boost your own revenues and increase the number of people coming to the area.