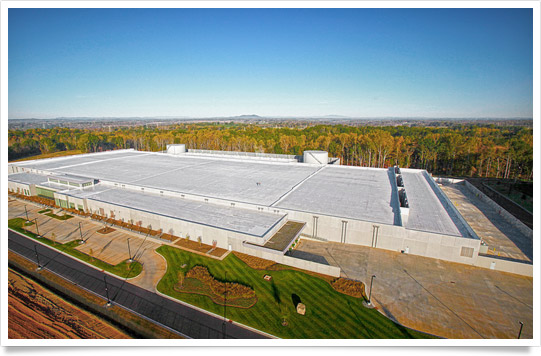 Today, Apple received approval for a 20-Megawatt Solar Farm at its North Carolina Data Center, as highlighted by Macrumors. It has also pledged to convert the entire center, which provides data for its iCloud and iTunes Store services—along with other centers run by Akamai—over to renewable power sources, reports Reuters.

Despite being constantly harassed for its environmental practices by organizations like Greenpeace, Apple keeps making strides toward improving the efficiency of its manufacturing processes.

Previously, Apple said that it planned to run the facility with a high percentage of renewable energy, this new statement means that they’ll attempt to go the full monty, with all of the power coming from the sun and from a smaller 5-megawatt biogas facility that it’s planning. Apple has updated its site with a new page called Data Centers and Renewable Energy:

By the end of 2012, we’ll meet the energy needs of our Maiden, North Carolina, data center using entirely renewable sources. To achieve this, we’re building our own facilities that will provide over 60 percent of the clean power we need. It’s another example of Apple’s commitment to designing for energy efficiency — from the ground up.

The plan to power the North Carolina Data Center completely by renewable energy is an aggressive one. Two solar installations that will be built around Maiden, NC, will provide 84M kWh of energy a year to Apple’s facilities. The farms will be installed by November 1st, with operations slated to begin on December 21.

Apple currently maintains a major section on its website that breaks down its environmental footprint, including the energy efficiency of its products.

Read next: Postmates launches Get It Now, a delivery service that will bring you anything in an hour