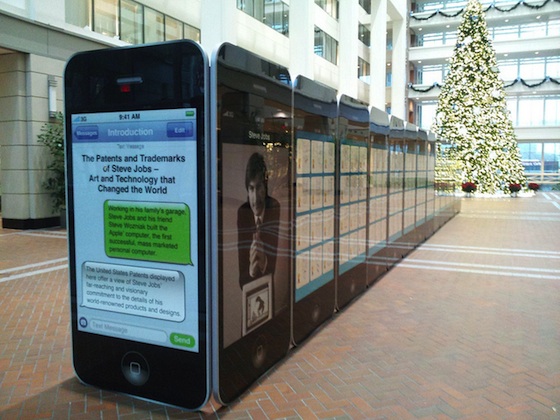 As a memorial of sorts to Steve Jobs, the U.S. Patent office has erected an exhibit at its museum in Alexandria, Virginia, reports Macrumors. The exhibit, located in the atrium of the organization’s headquarters, features a row of 30 displays dressed up like iPhones that display the 317 patents registered to Jobs.

“The display gives insight into the visionary commitment Jobs gave to each of the products and designs he influenced during his time with Apple,” said David Kappos of the USPTO, “the company he co-founded at the age of 21 with his friend and fellow computer enthusiast Steve Wozniak.”

There are also displays describing the impact of Jobs and showing photos of the man. This is really a great display put on by an organization that Jobs and Apple have had so many dealings with. As much as we hear complaints about software patents and litigation today, the system has at times been key in the advancement of technology in the U.S., and Apple has been among those American companies most known for its innovation.

The exhibit runs through January 15, 2012. Are you a reader near Virginia? If so and you make it down to the museum, let us know how it was and share some photos with those of us that can’t make it over.

Read next: Social football game I Am Playr rolls out on MSN UK