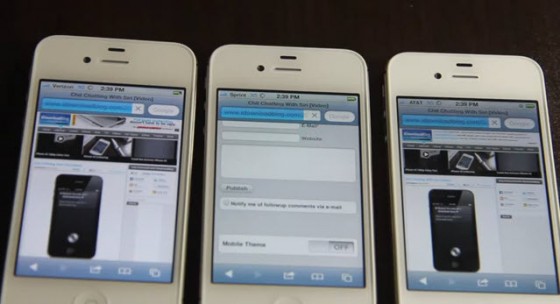 With Apple widening the availability of the iPhone 4S to include AT&T, Verizon and Sprint, USA residents looking to purchase the device have a lot of flexibility/choice but deciding on a carrier can be troublesome.

We’ve seen speed tests run before, highlighting AT&T’s ability to sustain fast upload and download rates that trump Verizon’s and Sprint’s, but a new test performed by Metrico Wireless sheds light on which of the three carriers is able to perform best for voice calls and how they rank in terms of data reliability.

Metrico tested the iPhone 4S on AT&T, Verizon and Sprint, performing more than 21,000 web-page downloads, 8,000 download/upload tests and 6,000 voice calls on real and simulated networks, and while stationary and in motion. They found that, out of the three carriers, Verizon was the most reliable for making and holding calls, with a 2.1% call failure rate, compared to AT&T’s 2.8% and Sprint’s 3.7%.

Considering that the average dropped call rate for the industry is 1.4%, Amit Malhotra, VP of marketing at Metrico says the company makes no guesses as to why the differences occur, but Malhotra notes that, in general, new features and functionalities in phones could have an impact on core functionality.

Whilst Sprint ranked the worst of the three carriers for dropped calls, it performed better on live network voice quality on the uplink (outward traffic connecting to mobile satellites), but AT&T beat it on the downlink. The test showed that Verizon lagged on both.

Metrico concludes that all three of the operators’ “marketing messages are spot on”:

While AT&T touts its data speeds, Verizon stresses that reliability trumps all else. Sprint, which didn’t dominate its rivals in any performance category, instead promotes its status as the only unlimited carrier.

Metrico wouldn’t go so far as to recommend which phone to buy, but Malhotra says the hope is that consumers use the numbers to pick their priorities and that handset makers and wireless operators use it to improve their shortcomings.

So if you are after an iPhone 4S that is less likely to drop calls, Verizon is the carrier to choose but if you want a truly unlimited tariff, Sprint will offer a package that is hard to beat. However, if data speeds and reliability are more of a priority, AT&T seems to be the one to go for.

Read next: More students are choosing physics because ‘The Big Bang Theory’ made it “cool”