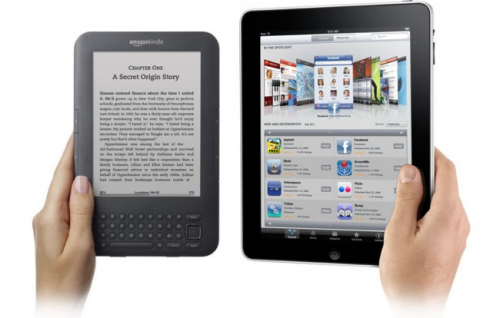 When it comes to gadget battles, the iPad is the hands-down winner in a matchup against Amazon’s Kindle reader. Hitwise Intelligence, the online research arm of credit rating agency Experian, says that the iPad is two times more popular than the Kindle based on Internet search volume.

Both Kindle and iPad saw a 40% increase in searches in the busy post-Christmas period around Boxing Day and 27 December 2010. Searches for iPads also increased dramatically in the first week of March 2011 when the iPad 2 was launched. However, after the launch of the iPad 2 searches have flattened out and now iPad consistently receives twice as much search volume as the Kindle.

What’s also interesting to note is the data Hitwise compiled about people who are searching for both the Kindle and the iPad, a so-called “Alpha Territory,” of consumers who might be persuaded to buy one device over another. During the course of the 12-week study period, 65 percent of people searched exclusively for the iPad, with 27 percent of folks searching exclusively for a Kindle. In the middle are eight percent of people for whom the iPad or Kindle would be adequate. I don’t see Apple sweating the loss of those in the “fighting ground” as much as Amazon would like to acquire them, but I’m sure neither wants to give up turf to a rival.

The data has retailers scrambling to make ready for the Christmas shopping season, which is now a mere three months away. Both the Kindle and the iPad are going to be hot gift items for consumers.

One way in which Amazon is at a disadvantage is that they’ve created a pretty good Kindle app that works on the iPad and iPhone, for reading ebooks. The same cannot be said of Apple creating an Amazon Kindle version of its offerings, though Amazon is hoping to go toe-to-toe with its own app store. Perhaps the real question here is how the iPad can be only twice as popular as the Kindle online.

Read next: Meet the socially-focused startups at the Unreasonable Institute Demo Day [Video]