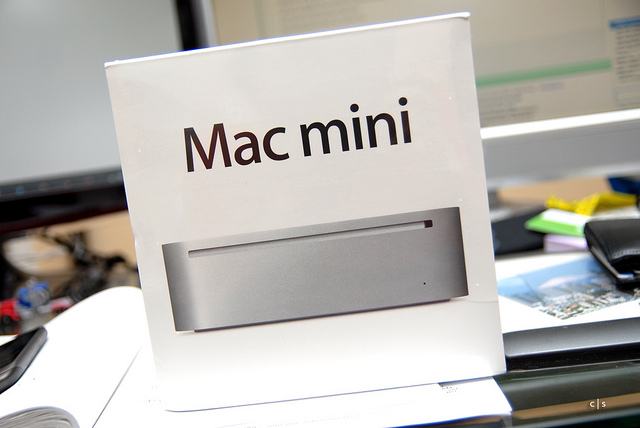 The new Mac Minis have the same sleek aluminium unibody designs of their predecessors but have been upgraded to include Intel’s Sandy Bridge processors and 500GB of storage by default. Apple has also introduced a new server-based Mac Mini, which utilises the in-built server features of Mac OS X Lion, perfect for those wanting to run a web-server or media server in their own home.

The basic model is powered by a 2.3GHz Intel Core i5 processor, with 2GB and 500GB storage and costs $599. It can be upgraded to include more memory (4GB) with the same storage space.

The 2.5 GHz dual-core Intel Core i5 model will incorporate 4GB of RAM and a 500GB hard drive and is priced at $799. There is the option to upgrade to a 2.7GHz dual-core Core i7 processor, up to 8GB of memory, and a 750GB hard drive with an option to add or replace with a 256GB solid state drive.

The Mac Mini Server model is slightly lower-powered than its counterparts but still packs 4GB of RAM and two 500GB (1TB) hard drives for all of your files. This will retail at $999 and options include adding memory up to 8GB, two 750GB hard drives, or up to two 256GB solid state drives.

You will notice that Apple has outfitted all models with a powerful AMD Radeon graphics, but has also removed the optical drive on all models.

All Mac Minis will be outfitted with a Thunderbolt port, which can be used to deliver high-performance data to devices through a small port on the rear of the device itself. In this regard, Apple has made it easy for customers to grab themselves a new screen to go with their new Mac Mini, unveiling the new 27-inch Apple Thunderbolt Display – setting you back a handsome $999.

The new display is almost identical to the current Apple LED Cinema Display, but will have a Thunderbolt port on its rear to easily connect with Apple’s Thunderbolt-enabled machines which after today will include iMacs, MacBook Pros and Mac Pros, MacBook Airs, and Mac Minis.

It comes with a FaceTime HD camera, 2.1 speaker system, 3 USB ports, a Firewire 800 port, and a second Thunderbolt port to enable users to connect other Thunderbolt accessories.

Apple says that “with just one cable, users can dock with their new display and connect to high performance peripherals, network connections and audio devices”.

The new displays will have an optional VESA mount, should you want to fix your screen.