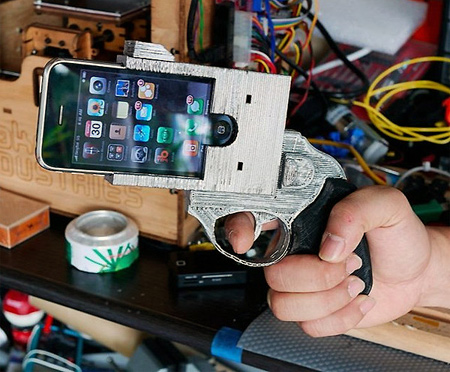 A man from New London, Connecticut tried to rob an Indian restaurant yesterday brandishing what was thought to be a small handgun, only for it to emerge the robber was using his black iPhone when cooks confronted him with kitchen knives.

Police were called to the restaurant, responding to a report of a suspicious person, learning that the man, identified as Jerome Taylor, used a back entrance to gain access to the kitchen before demanding money from the cooks.

The cooks, thinking Taylor had a small handgun at the time, refused to comply with the robbers demands, grabbing kitchen knives. When confronted, Taylor apparently became apologetic, said he was only joking and that he just wanted money for his child. He subsequently fled and was apprehended a couple of hours later after a foot chase with the police.

Then came a fantastic admission – Taylor claims he never had a handgun, instead he used his black iPhone to commit his attempted robbery.

Now, is there an app for that?!

Read next: How to stay online over Christmas without annoying your family