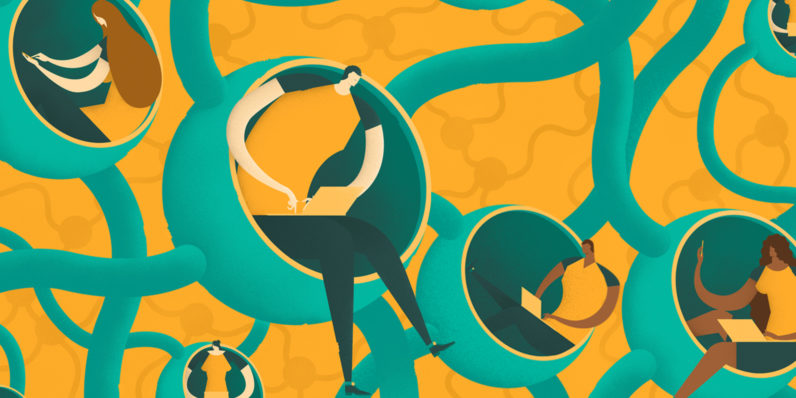 “Code is law,” as described in Lawrence Lessig’s book ‘Code and Other Laws of Cyberspace’, refers to the idea that computer code has progressively established itself as a predominant way to regulate behavior to the same degree as legal code.

With the advent of blockchain technology, code is assuming an even stronger role in regulating people’s interactions.

However, while computer code can enforce rules more efficiently than legal code, it also comes with a series of limitations.

With vast regulatory implications, blockchain applications have already raised many legal questions as they offer new capabilities to engage activities in ways that don’t fit neatly into existing legal frameworks.

Here are just a few ways blockchain and its various apps are changing the legal landscape.

Bitcoin, the world’s most recognizable digital currency, uses encryption techniques are to regulate the generation of units of currency and verify the transfer of funds, operating independently of a central bank. This means that this money has not passed through a bank or other financial institution, nor has it been screened by any government agency.

If you have a major transaction that is normally required to be reported, it simply isn’t. This leads to significant challenges, mostly concerning government regulators and current laws.

Bitcoin’s “monetary policy” is written into its code: New money is issued every 10 minutes, and the supply is limited, a hard money rule is applied similar to the gold standard (the money supply is fixed to a commodity and not determined by government).

If bitcoin is deemed a commodity, then the Commodity Futures Trading Commission (CFTC) in the US has jurisdiction over local bitcoin exchanges. Whether or not it’s a currency under certain legislation might determine whether bitcoin transactions can be taxed.

However, senators in Nevada have unanimously backed a proposal that would block local authorities from instituting taxes or fees on blockchain use.

Bitcoin’s blockchain has remained resilient to attack, and it supports a robust payment system. But this doesn’t mean the people using this technology are always upstanding citizens…

In 2013, regulatory bodies responsible for preventing financial crimes have introduced new regulations to bring bitcoin within the scope of its enforcement. Later that year, some 22 bitcoin companies and investors were unceremoniously subpoenaing by the New York Department of Financial Services (NYDFS) culminating in federal agents shutting down the Silk Road (a dark market largely powered by bitcoin).

Recently, lawmakers in West Virginia deemed it a felony to use bitcoin or other cryptocurrencies for money laundering, with an update to the state’s anti-money laundering (AML) statutes. The law specifically created a definition for cryptocurrency that is recognized as a ‘monetary instrument’ in the state.

But striking the right balance in these new regulations is a continuing challenge.

One of the key innovations of bitcoin and other virtual currencies is the ability to transact pseudonymously. Most virtual currency transactions do not require the transacting parties to know each other, meet face-to-face, or directly interact to exchange value.

New legislation requires that the party charged with violations have intent and/or actual knowledge. The lack of direct communication between parties is critical, and demonstrates the narrow impact of these current legal changes.

In most countries, financial services need to comply with rules pertaining to Know your customer (KYC) and AML. Overtime, blockchains and various new payment networks will not be exempt from such requirements. As such, some countries that have severely restricted  – or even banned – cryptocurrencies.

In some cases, blockchains are used to create tokens that aren’t designed to be cash at all. For instance, programmable blockchains like Ethereum let users create decentralized applications that have their own tokens.

“Distributed” and “decentralized” refer to the peer-to-peer aspect of the blockchain network – there’s not a single central database of the blocks. Each node on the network can have a copy of the whole ledger.

Blockchains are designed to be decentralized, with “layers,” where each layer is defined by an interoperable open protocol where companies and individuals can build products and services.

A new decentralized financial system made possible with bitcoin and other cryptocurrencies could be much simpler by removing layers of intermediation. It could help insure against risk, and by moving money in different ways could open up the possibility for different types of financial products.

Blockchain, like any type of ledger book, becomes the official record for tracking the history and validity of transactions and other information. That record is visible to all, even though individual elements of the transactions are encrypted and not publicly visible. Here, the division of public and private on a blockchain are especially interesting.

For example, your passport or other identity information might be securely encrypted, but the proof of the validation could be used publicly on a blockchain to prove that you are you for purposes of that transaction, without revealing the underlying private data.

But blockchains could raise challenges where financial institutions are forced to comply with certain privacy laws.

Some financial organizations are required by law to be able to permanently remove data when required to do so by a court (right to be forgotten laws). This can be a challenge for existing blockchain technologies because, by nature, blockchains don’t allow for data to be deleted, but rather only updated in subsequent blocks, which may not be sufficient to comply with the law.

Additionally, ownership of the information secured by a blockchain is also up debate.

Other lawmakers are trying to block what can and cannot be tracked… including another Arizona bill that would largely prohibit the use of blockchain tech to track firearms.

Thanks, in part, to its stringent encryption techniques, blockchains will have more legal bearing in court.  A bill in Vermont passed that would make records verified through blockchain technology admissible as evidence in court.

Laws such as this create a kind of legal backing for blockchain-based information.

In Nevada, a bill has deemed smart contracts and blockchain signatures acceptable records under state law.

As blockchain ledgers and systems become more common, their possible use in cases as evidence and discovery becomes more likely. This means lawyers will need to know such records exist as well how to handle that evidence as well as what specific information to request.

Because blockchains can process transactions, not simply store information about transactions, they can serve as a platform on which code can be executed and apps can be run. This is referred to as “smart contracts.” They have a logic built into them that triggers an action if a predecessor event occurs, without requiring a further intervention.

As such, simple contracts – and their reduction in transactional friction – are showing great potential in the short term.

An Arizona legislator wants to amend state law to account for blockchain signatures and smart contracts, making a signature enshrined on a blockchain a legal signature under Arizona law.

Harmen Schuringa, ‎Senior Legal Counsel at ABN AMRO Bank N.V. and involved in different blockchain projects, predicts issues how the current  “normal” contracts can be translated into smart contracts, especially when it comes to grey areas in an agreement and programming language.

“Commonly used terms in credit documentation such as ‘best endeavours’, ‘material adverse effect’ and ‘reasonable notice’ are currently very complex to translate into smart contracts. In case of the second definition for example, a borrower must inform the bank if something is happening within the company that could have a major impact on the company’s continuity. It’s very difficult to fully write out…

If an attempt is made to do so, there’s a chance that unforeseen situations will not be covered. Additionally, there shall be a time consuming discussion between the borrower and the bank about the exact wording of each situation that needs to be described. A practical approach is to combine the two: a smart contract can record all measurable events and actions to be taken automatically, and all other more vague provisions can be included in the ‘normal’ agreement.”

In many developing countries, wealth is created through ownership. Unfortunately, one of the most challenging aspects is determining who owns a certain piece of land. And disputes often occur when corrupt governments or individuals take advantage of the under-educated.

Having a public blockchain ledger would allow for everyone to be aware of who owns which parcel of land, and it would make the exchange of ownership much easier and more equitable. This streamlined proof of ownership would create a better base for authentication and governments could fairly tax individuals and businesses.

As this technology continues generating new possibilities for the way we interact and exchange information, it brings forth challenging and complex legal issues and pushes the boundaries of existing laws.

Blockchain technology is a subject of law – something that our laws will have to adapt to, just as they adapted to the internet, new medical technology, or social media.

Read next: Banking while browsing: The e-commerce solution