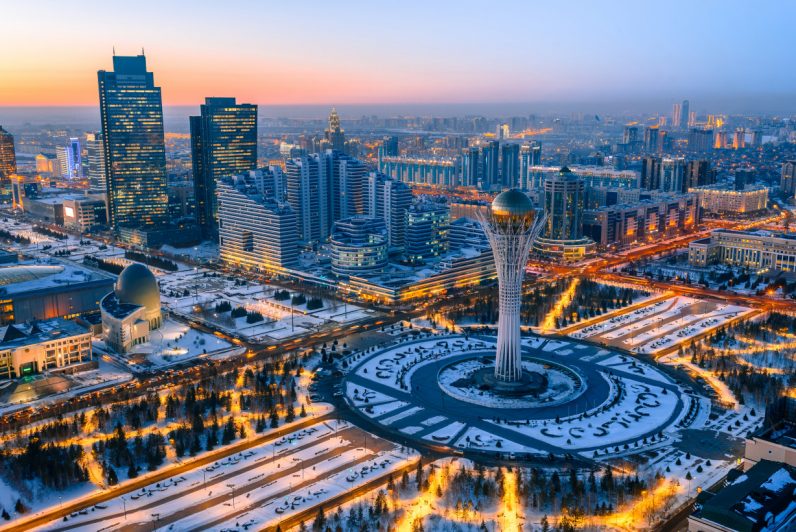 Imagine a country about five times the size of France with a population density of only six people per square kilometer. One could walk thousands of miles across the vast steppes without encountering a single human settlement.

This country, Kazakhstan, is the largest country in Central Asia. 70 percent of Kazakhstan’s GDP is revenue from the sale of mineral resources such as oil, gas, and coal. Thanks to oil revenues, life is pretty good here – in 2015-2016, the Doing Business ranking placed Kazakhstan among the fastest growing economies in the world. In addition, in terms of GDP in the region, the country is ranked second – Russia being in first place.

This prosperity, however, is temporary.

Historically, resource dependence has already ruined several states — such as Argentina in the 19th century, or the Soviet Union in the 20th century — and risks destroying dozens more. If oil prices decline, only the economies of rich countries such as the USA or Norway have a chance of surviving. These countries have a “nest egg” to buy themselves a decade or two in which to reorient the economy and adjust to the new realities. In poorer countries, such as Venezuela, the crisis strikes immediately, leaving people with nothing to live on.

The governments of developing countries are vying with each other in attempts to create their own innovation parks, develop technologies, and let Uber, Airbnb and other global services enter the country.

However, many people overlook the fact that innovative processes or new ways of producing old products often lead to price competition, pressure on wages and even bigger crises.

For example, hotel administrators in Georgia, a country in Central Asia, would most likely ask you to cancel your Booking.com reservation, because they wouldn’t want to pay commission fees — the amount of the commission often equals the hotel’s profit margin. In Ukraine, after a series of scandals, Uber has ended up becoming a “standard” taxi service that people can call on the phone and pay for in cash.

In his book, How Rich Countries Got Rich . . . and Why Poor Countries Stay Poor, Erik Reinert gives such an example: Thanks to new technology, there are now cash registers with pictures on buttons, so that a cashier in a diner wouldn’t even have to be able to read and write.

As a result, employers could start hiring illiterate cashiers and paying them lower wages while qualified employees can hardly find jobs with higher rates because they still live in a developing country with low demand for professionals.

Not only are developing countries using their own resources ineffectively and are employment rates at a record low, but in addition, new technologies may lead to fewer jobs for skilled workers.

In other words, importing Western technologies into underdeveloped countries only increases the gap between more and less technologically advanced sectors.

On the other hand, exporting technologies to technologically advanced countries would make it possible to create and export the country’s own IT products in the future, instead of exporting oil, gas and other natural resources.

Why Kazakhstan is looking to create their own technologies

In Kazakhstan, we started by solving internal problems, rather than importing Western solutions. The basis for this development was the country’s transformation program “Digital Kazakhstan”.

From 2017 to 2021, the Kazakhstan government will invest a minimum of $1 billion in technologies to facilitate the country’s digital transformation: digital infrastructure development, social projects, digital government development, and innovations in the industrial sectors.

For instance, millions of Kazakhs live in rural areas where there are few qualified teachers, and medical records are still stored on paper because there’s no unified system for storing them.

Implementing technology alone is not enough here. Apart from integrations with Coursera or edX, people in remote areas should have internet access. That’s why in three years, Kazakhtelecom plans to lay 20,000 km of fiber optic lines and to cover 1,249 villages, each populated by more than 500 people.

Broadband access and 5G will pave the way for related technologies, such as financial technology services, IoT and others. For example, remote regions where electricity is cheap will be able to host data centers for cryptocurrency mining.

New technologies can both create demand for skilled labor and lead to a decrease in the demand. Building roads and launching a HyperLoop won’t solve transport problems. And buying 10,000 high-tech tractors from John Deere won’t help increase the productivity of agriculture. One must first decide how these tractors will communicate and through what platform.

For this purpose, we launched an M2M network based on our own platform. The network covers 72 percent of Kazakhstan’s territory and 100 thousand kilometers of roads — it is one of the highest indexes in the world.

Technologies should not add to the gap between developed and undeveloped industries but reduce it. There’s no point in developing new oil fields while the old ones work at half efficiency.

For underdeveloped countries, innovation doesn’t mean having a HyperLoop up and running in five years. First and foremost, they need to digitally transform their key industries and create an infrastructure before adopting (their own version of) Airbnb and Tesla.

Don’t follow the path of failed states. Create your own technologies, and don’t idolize someone else’s solutions.