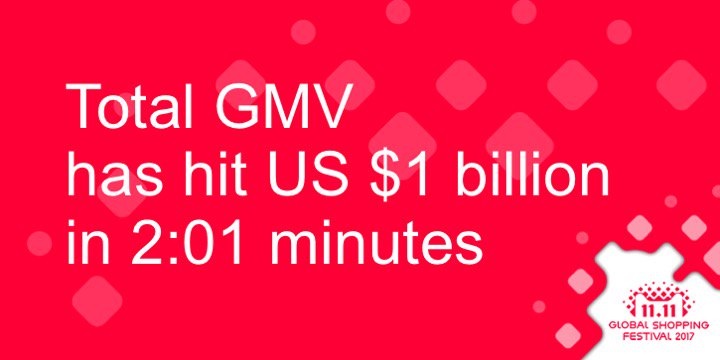 In two minutes of sales time, Alibaba’s gross merchandise volume totaled $1 billion. By the forty-minute mark, the site’s sales had surpassed $7.5 billion. The first delivery was made 12 minutes after midnight.

Other sources confirm that 97 percent of sales made on the site in the first 30 seconds were from mobile devices.

Less than 15 minutes into Alibaba's Singles day GMV has hit US$5 billion. The company says within first 30 seconds, 97% of sales generate through mobile devices

And kicks off w some some kind of strange rift on a Victoria's Secret fashion show (?) pic.twitter.com/vNdH1U4Otc

Sales from last year’s Singles Day grossed $17.8 billion. If the current trajectory is anything to go by, Alibaba is going to surpass that number in the time it takes you to read this article. The event typically outsells both Black Friday and Cyber Monday, and today doesn’t look like it’ll be any different.

Read next: Today's Singles' Day is Black Friday's big brother: Here's how to make the most of it