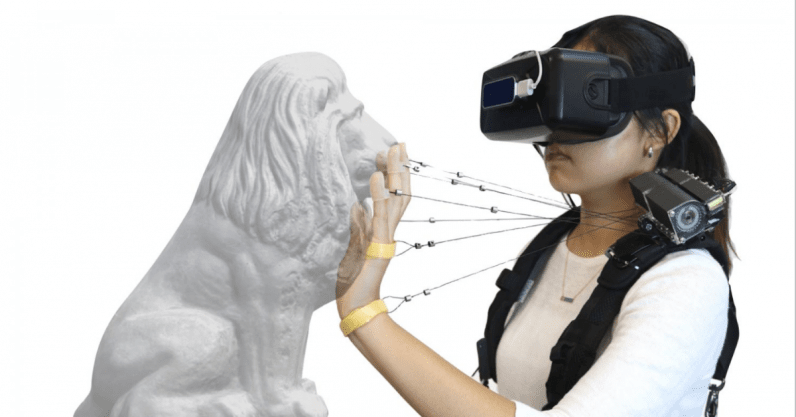 A new haptic device simulates the feel of objects in VR by pulling on strings attached to a hand.

The shoulder-mounted system is equipped with spring-loaded retractors like those used on neck cord ID badges. These retractors unwind a string to each fingertip, one to the palm, and another to the wrist. A motion sensor on the VR headset then tracks the user’s hand movements and sends the signals to the springs.

When it senses that the user’s close to an object, the ratchets lock the strings to mimic the feeling of the surface.

[Read next: This AI suitcase could help visually-impaired people to travel]

This mechanism can simulate the contours of a virtual scripture, the weight of a piece of furniture, or the feeling of a high-five given to an avatar.

The device was created by Carnegie Mellon University (CMU) researchers, who claim that it provides a more realistic sense of touch than most haptic devices, such as vibrating hand controllers.

“I think the experience creates surprises, such as when you interact with a railing and can wrap your fingers around it,” said study co-author Cathy Fang, a mechanical engineering and human-computer interaction student at CMU. “It’s also fun to explore the feel of irregular objects, such as a statue.”

It also consumes a fraction of the power used by other haptic systems, as it relies on springs rather than motors to control the strings. The only energy it needs is a little bit of electricity to engage the latches.

The lack of a motor also keeps it cheap. The researchers estimate that a mass-produced version would cost less than $50.

The inventors envision the device being used in VR games, virtual design, and engineering training.

It sounds particularly useful for life under lockdown, as you could use it to pick up items in a shop or enjoy interactive experiences without leaving your home.

Read next: Here's your stupid horoscope made by smart AI