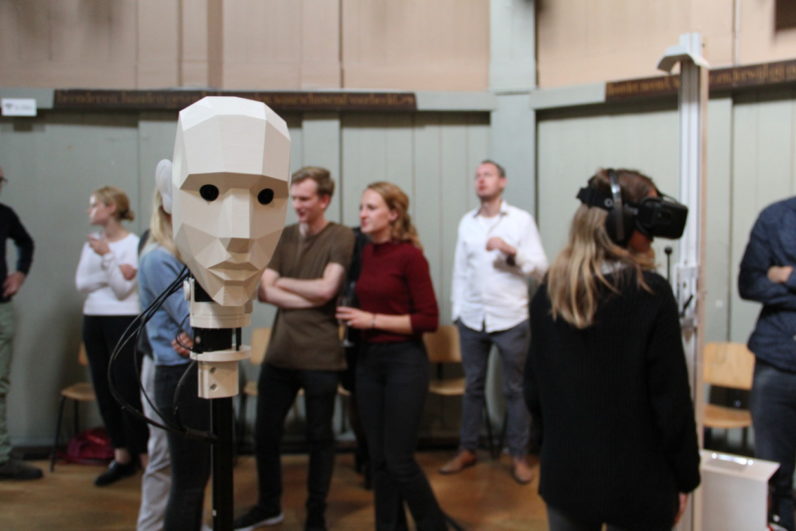 Does the thought of dying absolutely terrify you?

If so, you might suffer from a condition known as ‘Existential Death Anxiety’, a disorder Dutch experimental designer, Frank Kolkman wants to treat with Outrespectre – a proposed medical device supposedly capable of simulating out-of-body experiences.

Intrigued, I contacted Frank to find out more and was invited to try his creation during the first ever human experiment this week in Amsterdam.

My initial expectations were based purely on the advertising: a picture of Frank wearing a VR headset. I therefore expected the experiment to involve wearing a (not that impressive) VR headset that probably just visually mimics the process of lifting off the ground or something…

I am quite the skeptic so knowing the alleged out-of-body experience would be fake before even trying it didn’t provide much hope.

The actual theory behind the experiment, however, is what sparked my interest. The idea that having an out-of-body experience can actually reduce our fear of dying really got me eager to try it, not that it’s even a particular fear of mine.

The advertising mentions Frank’s device was inspired by recent parapsychological research, a field of study dedicated to investigating those weird and whacky psychic and paranormal claims such as telepathy, reincarnation, and near-death-experiences. I looked into it a little more and discovered that Frank isn’t the only one who has been conducting experiments of these sorts. This gave me slightly more confidence.

Upon arriving at Waag Society’s Creative Care Lab where the experiment took place, I thought it would be good to get some background from Frank before taking the plunge into the unknown.

Supported by Amsterdam Fund for the Arts, the concept was initiated as part of a collaboration between Waag Society’s Creative Care Lab, Makerversity Amsterdam and Museum Vrolik, who challenged Frank to design something using ‘end of life’ as a theme. This forms part of the collaboration’s ‘MakeHealth’ research agenda, exploring the role of citizens in healthcare innovation.

Frank spent the better part of 6 months conducting a theoretical examination of ‘end of life’. He discovered there has been a dramatic shift from death once being a primarily domestic activity 40-50 years ago, to now, with around 90 percent of people in the Western world dying in a medical institution.

In the case of terminally ill patients, for example, a doctor’s role is to prolong life as long as possible, usually leading patients to decide to undergo intensive operations or take dreadful medications in order to live longer. When a patient does eventually die, death is therefore seen as a loss.

“The physician loses, the patient loses, the family loses, so, I was wondering, what is it that’s preventing us from dying more comfortably?” Frank asked.

It turns out that out our ‘Existential Death Anxiety’ is what makes us undergo these rigorous procedures right until our last breath. If we were less afraid of dying, would we then be more comfortable and accepting of death?

The final trigger before Frank’s creation took shape was the idea supported by parapsychological research that the majority of people who have a near-death-experience say they lose their fear of death completely. As an out-of-body experience is said to be a common occurrence when people ‘nearly die’, Frank decided to simulate this sensation with Outrespectre in an attempt to reduce our fear of dying.

The device was much more elaborate and professional-looking than expected. It consisted of a robotic head perched above a dolly track, allowing it to roll back and forth smoothly, fitted with purple LED’s for effect. Participants stand in front of the track where a VR headset and headphones are housed, with the whole machine running from a small computer in front of the standing area.

After watching many participants before me put on the headgear and look around the room while their head movements were mimicked by a (slightly creepy) robotic head with rubber ears, my time to try Outrespectre had finally arrived. The device actually stopped working just before my turn, but thankfully Frank worked his magic and got his robotic friend working again.

I stood with my back facing the robot and put on the headset and headphones, following the visual prompt to start the experiment. Immediately, I had a strong sense of ownership of the virtual me and as the robotic head rolled backwards on the dolly track, so too did my perception of ‘me’, leaving my body behind.

I could see myself and my environment, from the back, with perfect clarity as I slowly drifted away from my body. With microphones in the robot’s head connected to the headphones I was wearing and cameras in the robot’s eyes connected to the VR headset, both my sight and vision appeared to come from behind my real body, providing a genuine sensation of drifting away from myself.

As people whispered or yelled obscenities in the robot’s rubber ears, these sounds went through my headphones, throwing me off balance and making me a little confused as to where these voices were coming from. As I slowly rolled back towards ‘myself’, it sort of felt as though my soul was returning back to my body. As I took off the headgear I was thankful my soul and body were back together again!

In technical terms, Frank explained “We get positional data from the headset that we translate to cerebral positions – so head movements. Then we get the video feed from two different stereoscopic cameras. These are then fed to the computer into unity renders for each eye. We have a number of arduinos connected that are controlling peripheral stuff like the LEDs and the movements of the machine”.

Basically, Outrespectre tries to disrupt our sensory balance as much as possible.

The equipment’s design was influenced by X-ray machines and CT equipment. As Frank has a past medical history which required him to be tested with devices like these, he was inspired by what he calls “hospital theatrics” and the way patients have to trust and surrender to these big machines.

“A VR headset is super unimpressive by itself, but if people get the idea of “ooh this is a big machine, I wonder what it does”, then it’s a completely different experience” Frank explained. He wanted to make the experience relatively quick, non-invasive and make it scalable so it can be used in a public setting.

Frank’s next addition to Outrespectre is to introduce touch with a hammer mount installed to tap participants whilst the simulation takes place. This has proven to be quite successful, however, as it is not yet stable he left it out of the first experiment. I can imagine this function will further disbalance your senses, no doubt making the experience even more disorientating.

Outrespectre is scheduled to be presented to a wider audience at the Victoria & Albert Museum in London on September 23rd – 24th, ‘De School’ in Amsterdam on October 12th and during Dutch Design Week in Eindhoven between October 21st – 29th.

Frank hopes to collect responses from participants to get some insight into whether his design is effective. He envisions technology such as Outrespectre to be installed in hospitals the same way as X-ray machines and CT equipment, perhaps even used as a form of therapy in the future.

Whilst I can’t say that my out-of-body experience made me any more or less fearful of death, the speculative design really got me thinking and ultimately, that’s the point.

As Frank put it, “We need to start thinking about designing stuff, not to prolong life, but to let us more comfortably acknowledge our own mortality. I’m not saying Outrespectre should be the solution, but I’m saying there should be different options”.

Whilst I know that dying is never going to be something worth celebrating, when my time comes, I will definitely rest easier imagining there’s more in store for me than nothing at all.