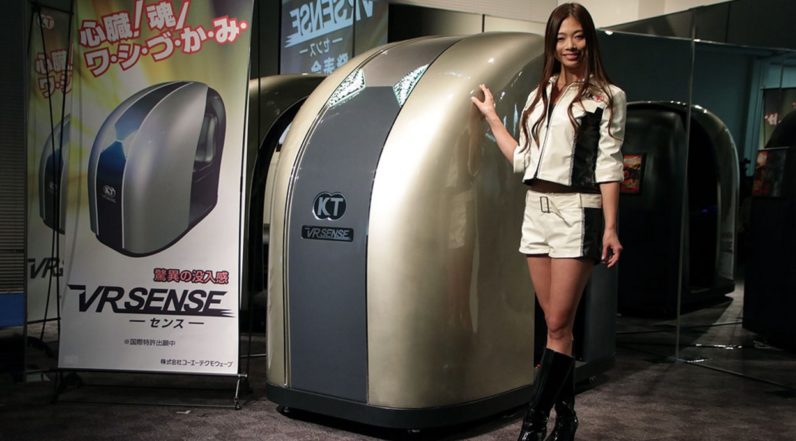 Ever wanted to get so immersed in a virtual world that you can feel and smell it? Thanks to Koei Tecmo, you might be able to!

Koei Tecmo showed off their new cabinet, called “VR Sense” in a press conference this weekend. It’s a sturdy silver monstrosity, about the size of a dresser.

According to Kotaku, VR Sense works with Playstation VR technology. Photos show users wearing elaborate PSVR headsets and clutching PS Move controllers. It doesn’t say if those come with the cabinet, or if you’ll have to purchase those separately.

In addition to your eyes and ears, VR Sense engages your nose and skin. The cabinet has functions for wind, “mist,” temperature, and scent. All of these will presumably work together to increase your immersion.

Supposedly the “scent function” will be able to replicate multiple kinds of environments. The pictures from the conference show everything from a forest to a snowy mountaintop.

The chair in the cabinet can also move in all different directions. Unsettlingly, it also comes with a sturdy seatbelt. This might mean a bit of shaking or jostling action for the users inside.

It isn’t just breezes or rain that you can feel when you sit in the VR Sense. One of the pictures shown during the press conference implies that users can feel bugs and rats crawling on them.

Three games were announced for the VR Sense: Dynasty Warriors, GI Jockey Sense, and Horror Sense. One of the pictures shows a racing horse, so presumably the player will be riding said steed in the game.

VR Sense can be played with at the Japanese Amusement Expo, a trade show for arcade products in Tokyo. The Koei Tecmo reps hinted that it might also have use outside of arcades, including in hotels.

No word yet on how Koei Tecmo plans to engage your taste sense, but we can only hope to never find out.

Read next: Over half of the world's internet traffic isn't coming from humans