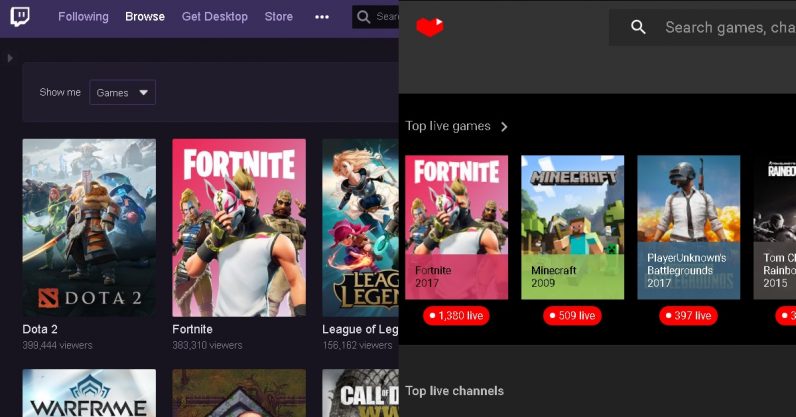 Rumors this week have surfaced that Twitch is trying to encroach on YouTube’s territory by offering deals to its top stars if they’ll come and stream on Twitch instead. Twitch‘s motivation appears to be hunger for a slice of that sweet YouTube advertising pie.

A report from Bloomberg indicates Twitch is making a concerted effort to pull YouTube’s talent for its own site. Bloomberg’s sources name Will Smith, lifestyle vlogger Gigi Gorgeous, and prankster Tanner Braungardt as examples, with only the latter having apparently accepted. Turning them down is no small thing, considering the number Twitch is reportedly guaranteeing them yearly is in seven figures.

Twitch‘s motivation for this seems to be green. A report on Nasdaq says Twitch CEO Emmett Shear set an advertising goal of $1 billion for his own site. According to Marketwatch, YouTube’s projected revenue for 2018 is $129.5 billion, with quite a large portion of that being advertising revenue. If you want to be good at something, imitate the ones who are already good at it, am I right?

Meanwhile, just as Twitch is trying to entice potential stars to its side, YouTube is trying to make its platform more appealing. After not really addressing a revenue choke now called the “Adpocalypse” for months, it’s making an effort to offer more incentives for content creators.

YouTube had been introducing new monetization options, including tipping features and personal merchandise stores. Some of those features have a whiff of Twitch about them, such as the channel Memberships which are functionally the same as Twitch‘s channel subscriptions, and go for the exact same price.

But now, at least according to Bloomberg, YouTube is apparently going the extra mile and actually starting to pay its top creators, albeit in exchange for promoting their new features.

As of the company’s 2017 report, there are over 2 million streamers on Twitch, with 150,000 of them streaming often enough to be part of the Affiliate program. Surely one of those streamers has the capacity to be the next Big Name Content Creator. If Twitch has seven figures to spend on content creators, it might consider putting that money back into its existing community.

For the most part, the two sites still offer two different directives. YouTube has streaming services, but it’s a video site. Twitch has video-making abilities, but it’s a streaming site. One of the reason’s YouTubers are turning Twitch down, according to the report, is the site insists on a certain number of hours streamed per day. Of course YouTubers don’t all want to do that.

If the two sites are in healthy competition, then it can only be good for creators, who have their option of having the best possible revenue stream for themselves. But Twitch shouldn’t be fighting with YouTube for the same handful of names, because I doubt very many are going to want to move to a completely different form of entertainment. Twitch has plenty of its own stars — it should cultivate and motivate them, not try to poach those who are already entrenched in YouTube.