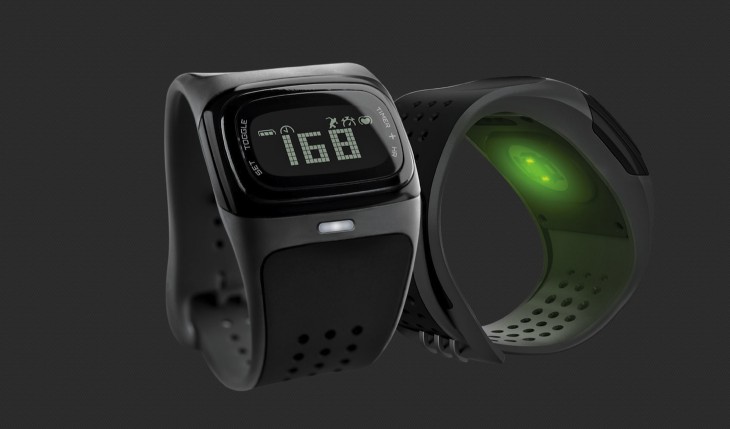 Last week at Mobile World Congress, I caught up with Liz Dickinson, the creator of MIO, the world’s first strapless heart rate monitor sports watch, and founder and CEO of MIO Global.

Dickinson flew out to Barcelona to talk to press and (potential) partners about her company’s latest product, dubbed Mio Alpha, which is essentially a strapless continuous heart rate monitor sports watch.

You’ll note the difference between what Dickinson invented over a decade ago, and the company’s next flagship product (PDF): as early reviews point out, this is a heart rate monitor watch for athletes – or at the very least for people who are very serious about their sports and fitness.

The way the Mio Alpha watch monitors heart rates as accurately as possible – even when people are moving really, really fast – is by using two green LEDs and an electro-optical cell to “sense” the volume of blood under the wearer’s skin.

The Mio Alpha watch uses patented technology from the research labs at Philips Electronics and garnered a lot of attention thanks to a Kickstarter campaign to get the gizmo funded.

The Kickstarter campaign ended up raising over $320,000 for the development of the watch, well over the initial goal of $100,000.

The watch costs $199 but will only ship to buyers in the United States and Canada initially.

What’s so cool about the Mio Alpha – besides the fact that it’s cutting-edge technology wrapped in stylish design, and that it also tells the time – is that the watch can communicate live heart rate stats to both Android and iOS devices via a wireless Bluetooth connection, although the company doesn’t have a mobile app of its own for now.

Instead, the Mio Alpha links up with third-party apps like Runkeeper, Mapmyrun or Endomondo for now, while a ‘different’ kind of mobile app from MIO Global will be coming later this year.

In the interview embedded below, Dickinson explains the reasoning behind this strategy, and tells us more about the Mio Alpha.

Read next: ABI: App downloads to hit 56b for smartphones in 2013, 14b for tablets; Android and iOS leading respectively