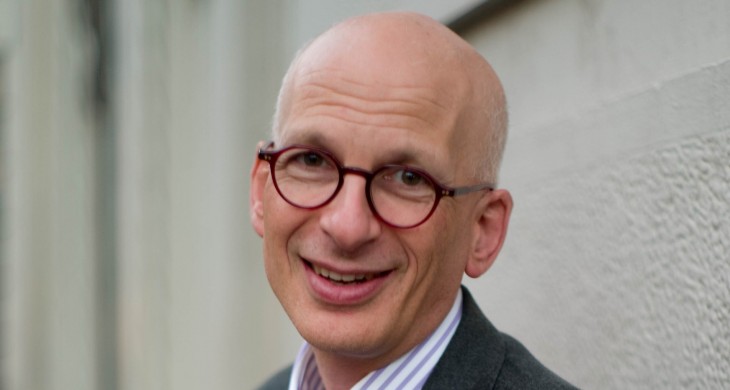 As the founder of  one of the earliest online marketing companies, creator of Squidoo, and author of multiple best-selling books, American entrepreneur Seth Godin needs little introduction.

Godin launched Yoyodyne way back in 1995, a company which used contests, online games, and scavenger hunts to help market companies, with the likes of AOL (America Online), American Express, Microsoft, Sony Music and Sprint using its services. Yoyodyne was acquired by Yahoo in 1998.

But it was at Yoyodyne where Godin popularized the principle of so-called permission marketing, and went on to author many books on the subject.

In recent years, Godin has been focusing more on self-help style books, on how people can get ahead in the world and be the best they can. He has written and spoken widely about the future of learning in a networked world, and how the role of the teacher has to evolve in line with advances in technology. “There’s a very big difference between ‘access to information’, and ‘school’,” Godin has previously said. “They used to be the same thing. Information is there online, to any one of the billion people who has access to the Internet. So what that means, is if we give access to a 4-year-old, or an 8-year-old or a 12-year-old, they will get the information if they want it.”

Godin’s latest work is The Icarus Deception. One of its underlying concepts turns an age-old idiom on its head, in that it’s not better to be safe than sorry at all, in terms of work aspirations and life in general. It’s better to be sorry than safe, reckons Godin. It’s all about taking risks.

Icarus famously drowned after burning his wings when he flew too close to the sun, going against the advice of his father. But the Icarus metaphor has been lost along the way, says Godin.

“…I called it the Icarus Deception, [because] people think the story says don’t fly too close to the sun,” he says. “But that’s not what it used to say. 150 years ago, it used to say ‘don’t fly too low’. Because if you fly too low, the mist and the water will weigh you down, and you will perish.”

But how does a Greek fable apply to Godin’s new book? He explains.

“It’s about not settling – for 100 years we lived in an industrial economy, where people who ran the factories, made shoes and cars and life insurance policies, and amusement parks, they wanted us to fit in,” he says. They wanted us to be compliant, they wanted us to do what we were told, and that’s why they invented school. To teach us to sit still, and listen and regurgitate. But that industrial age is dying, right before our eyes.”

It’s worth noting here that Godin took to Kickstarter to stir-up interest in his latest book, as well as sell advance copies. He passed his $40,000 target in just a few hours, finally securing $287,342.

You can watch the full interview below, where we discuss risk-taking, treating work like art, and why Kickstarter isn’t the perfect funding machine. We also deep-dive into why traditional book publishing is dying, Squidoo, entrepreneurialism, startups…and where he gets his ideas from.