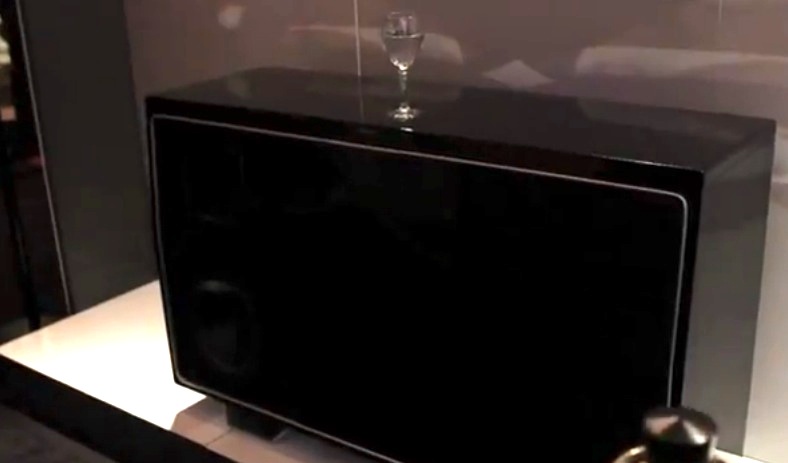 Years ago, if you walked into someone’s home, you’d have likely seen a large, floor-standing TV and/or hi-fi stereo system. These “console” devices were the focal points of living rooms but they’ve long ago met their extinction, being replaced by smaller, slimmer and less conspicuous alternatives. But if Klipsch has anything to say about it, that will change in a few months.

The company has built, and will soon release, a behemoth of an audio system called, fittingly, The Console. It’s not a home theater system, instead relying on 10-inch drivers shooting sound out of the front, then horn-loaded tweeters. But inside of The Console are two 12-inch drivers, in a bandpass configuration, providing that deep bass. Because of the design, however, there’s literally zero vibration on the outside of the cabinet.

When it’s released, there will be HDMI, optical audio, USB and best of all AirPlay. The prototype device that we saw and heard already had AirPlay enabled, and it truly does sound amazing. It’s loud (to the point of painful), clear and accurately reproduces sound across a wide spectrum of frequencies. To say that Klipsch has outdone itself with The Console is an understatement.

Pricing for The Console isn’t set in stone just yet, but you can place your bets on the $6000 to $7000 range. The company is aiming for it to be released before the end of 2012 and I’m going to be saving my pennies to get one as soon as it’s available.

We’re still scouring for the best of CES 2012. Want to keep up with everything we find? Bookmark this link.

Read next: Reddit user ventures to the Daily Show, gets Jon Stewart to talk SOPA on air