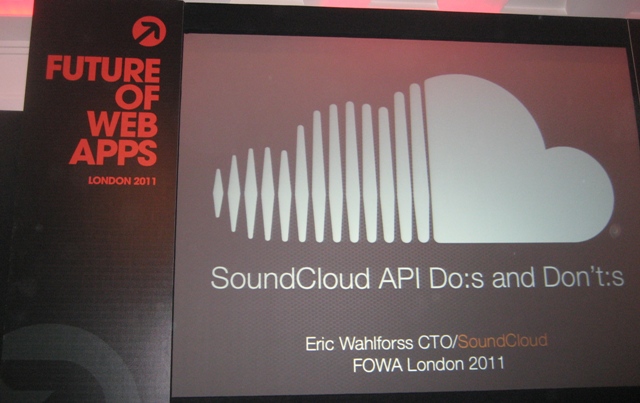 At a London conference back in June, The Next Web caught up with SoundCloud Co-founder Alexander Ljung to get this thoughts on the role that audio plays on the Web. “If you’re ever scared during a horror movie, try muting the TV rather than shielding your eyes”, said Ljung. “You’ll find it has a much greater effect. Sound really taps into our emotions.” Alex revealed the vision of SoundCloud was to “unmute the Web” and make audio a key facet across cyberspace.

At the Future of Web Apps conference in London yesterday, SoundCloud’s CTO and Co-founder, Eric Wahlforss, took some time out after his keynote to chat with The Next Web.

Back in June we reported that SoundCloud had 5m signed-up ‘sound creators’, representing a 4m increase on the previous year. And a little over 3 months on, SoundCloud now boasts 7m users – that’s a pretty impressive growth spurt in anyone’s book.

During his speech at the Future of Web Apps conference, Eric covered some of the dos and don’ts of Web APIs, as well as why companies should open their APIs in the first place – namely it empowers users. “Everybody loves talking about stuff that empowers them”, says Eric. “And this helps spread the word about your service”.

Read next: Objects stored on Amazon S3 have almost doubled this year