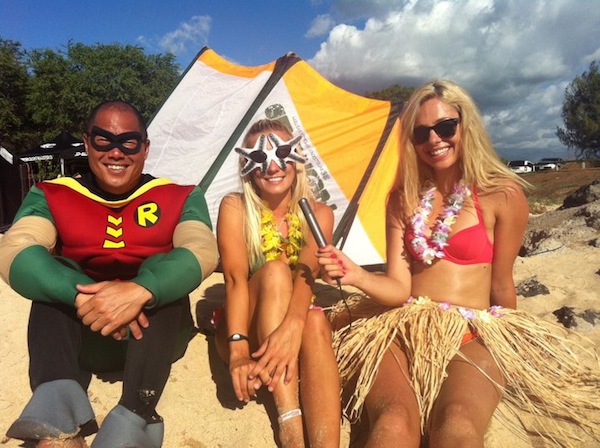 Last week I was lucky enough to be invited to a entrepreneurs/VC Kiteboarding camp in Hawaii called MaiTai. Over 200 entrepreneurs, VC’s and some of the world’s best kiteboarders gathered on the Island of Maui for a week of panels, networking and most importantly; kiteboarding -a sport that is the golf for geeks in Silicon Valley.

Aside from learning to kiteboard, a sport that I am now obsessed about, what emerged from my time on the trip were relationships with people who also work in the technology industry -relationships so deep, many will be life-long friends.  My life is spent traveling the world from conference to conference meeting people, but never forging the same level of depth that are unique to trips like MaiTai.

But It’s not just relationships that got made, serious business gets done; The co-founder of Mai Tai, Bill Tai, Partner at Charles River Ventures, told Forbes’s Kim McNicholas how TweetDeck’s initial investment started on the beach at MaiTai. A company that just sold to Twitter for around $40million. MaiTai, which is now five years in the making, also provided insightful panels featuring entrepreneurs like Scribd’s 25-year-old CEO Trip Adler who’s raised over $13million in venture funding.

It’s never been more important to forge authentic relationships with people, the expression ‘it’s not what you know, it’s who you know’, has never been more poignant than now; a time when anybody can access anyone, whenever they want. Sites that measure your social influence like Klout and Empire Avenue indicate a move towards a people driven economy where social capital turns into influence and revenue.

The growth of social networks with focus on the individual, is testament to the power of social capital, and now who you are and who you are connected to is almost more important than the product you are trying to build; In Silicon Valley at least, VC’s are investing in teams of great people, not necessarily a great product, in the knowledge that the team will pivot and pivot until eventually hitting jackpot.

The social network is getting smaller

The big trend at SXSW this year was group messaging, why? Because our social networks have become so big, they’ve also become meaningless. Whilst we can all have 5000 Facebook friends, the trend is that people want to connect to a smaller number of people, maybe 50 or 100 whose relationships have more meaning. Path for example is a photo sharing service that limits your sharing capabilities to 50 friends and GroupMe is like a private chat for a select number of contacts on your phone. I believe the same is happening with conferences, I can go and swap my business card with 500 people at a conference, but at a smaller event I can make 100 solid relationships with people that last a lifetime.

Unconferences have been around for a while providing an unconventional and creative setting for people to meet and network, but I’m witnessing a trend for the conference aspect of an event, (thousands of participants watching a speaker, bad coffee, organized networking) being thrown out of the window and more activity conscious events being organized. Friends who went on Summit Series, an event for entrepreneurs on a charted cruise ship that sailed round the Bahamas, were raving about their yoga/music and shark tagging expeditions as well as the relationships they made onboard.

In Europe I have been a member of an entrepreneurs group called Mr Rongs, set up by entrepreneur Robert Loch (much talked about in technology journalist’s Paul Carr’s Book) since 2007 and if it wasn’t for the support I had from that group I would have never started my first company. Since then I have been a member of the European entrepreneur’s SPICE group organized by VC Alex Hoye and this group regularly shares and helps each other with the  challenges and problems faced being and entrepreneur trying to build our various startups. The similarities between all of these events are that these groups regularly organize the events around an activity, be it a ski trip, sailing trips or paintballing trip, making them cost effective so even the bootstrapping entrepreneur can afford to attend.

So what was the magic formula that made MaiTai and other anti-conference events so special? When I try to dissect the conditions that fostered these relationships, it’s hard to analyze, but here goes:

When you’re with a group of people learning a new skill, it gives everyone something to talk about. Weather you’re a pro or a beginner you can talk about what you managed to do that day. Definitely beats the boring ‘Who are you, what do you do pitch’.

When you are enjoying yourself  and having fun with people, you and they tend to open up and talk about more than just business. This takes mutual trust and an environment that makes each other feel relaxed.

Takes people out of their comfort zone

When you don’t have familiar surroundings or are in a place with no phone coverage it forces you to talk to people, be resourceful and you have to make an effort to get along with people. The biggest lessons I have learnt about myself are ones when I am faced with a difficult or unusual situation.

What should we take from all this? I would rather spend $500 for a plane ticket to one of these anti-conference events than spend the same money going to a conference with thousands of people; I’ve been building my social networks for years, now I realize it’s quality over quantity.

You can watch the videos from MaiTai2011 below: