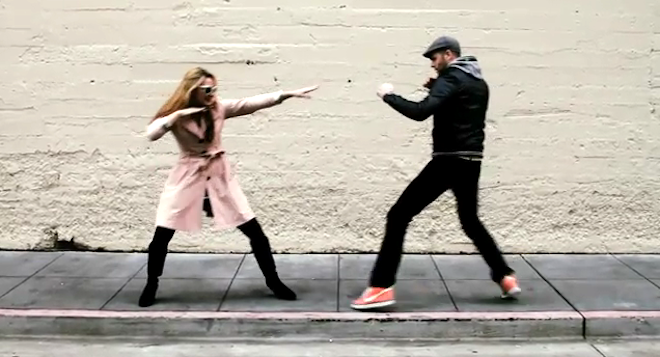 It’s the biggest tech party of the year, and the entire industry is going. SXSWi is simply the place to be in March for tech. Twitter was launched there, Foursquare found its footing (and is coming back this year with an amazing spread) and brands do whatever they can to gather attention during the week of insanity.

Of course TNW will be there. But we’re not displaying anything, we’re just there to see what’s on display and find the best of the best stuff. But just going on trips isn’t our style. We want more. We wanted to do something truly over the top to match the theme of the week.

This time we’re doing our own experiment as well. We call it #TNWhustle. The idea is simple: You put one hot 25-year old British girl (Hermione Way) and one bald, 32 year old guy (charming though) (Patrick de Laive) on the streets of Austin without any money, but with cameras, phones, a lot of creativity and Square. They have to make a living by making money on the streets, at the conference and during the parties while covering the event. They will accept credit cards only.

Not only they have to make a living, there is a competition element as well going on here. The one that brings in the most cash (I mean credit card payments) wins the battle of the sexes. The loser has to sing a love song dedicated to the opponent on main stage during TNW Conference (that’s gonna be embarrassing).

You can help @HermioneWay and/or @Patrick by tweeting ideas or retweeting their updates, videos and pics (use #TNWhustle). Also if you want to be involved in the battle in any way (sponsor, donations), get in touch with us at TNW and we’ll make sure that they get your offer.

Update: A BIG thanks for Nikon for sponsoring our hotel and giving us a camera-you can follow their shenanigans at #NikonSXSW