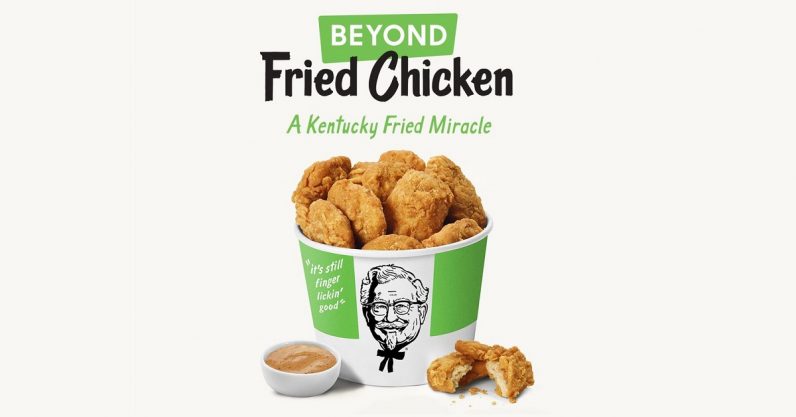 Kentucky Fried Chicken is testing a new recipe at a restaurant in Atlanta — essentially, it’s going without the “C” of KFC, offering a “Kentucky Fried Miracle” in the form of Beyond Meats’ plant-based fake meat nuggets. If it’s well-received, KFC might roll it out to more places — which can only be a win.

It’s Kentucky Fried Chicken but it’s made with @BeyondMeat. It’s confusing, but it’s also delicious. Feast on these Kentucky Fried miracles tomorrow while they last at KFC in Atlanta, Georgia. pic.twitter.com/lC5oYM1cmk

Plant-based meat alternatives have been around for decades, but it’s only recently that mainstream restaurants have offered them as a menu option. KFC will join the illustrious company of Carl’s Jr, Burger King, and Del Taco — all of whom offer plant-based meats either from Beyond Meats or its competitor Impossible Foods. This definitely adds zest to the ongoing race between Beyond and Impossible as to who can corner the Sounds-Like-A-Barnum-And-Bailey-Act-Meatless Market.

It’s not such a bad notion — the vast majority of the appeal of KFC meats, at least for me, is in the breading. One presumes you could slap that on whatever substance you like and it would still be worth devouring on a weekday night when you don’t feel like cooking. I’m not married to a drumstick (not anymore, anyway). That said, the responses on Twitter have been… divided, let us say. But hey, it’s just an option — KFC isn’t going completely green any time soon.

I don’t know , man. I was a tad bit Leary about this beyond meat biz. Now fake chicken… Hell nah. #givememeat #Carnivore

Non-vegans: eating meat is my choice, please respect it

Non-vegan: I’m no longer gonna go to KFC because vegans have a choice on the menu

One caveat for my vegan and vegetarian friends out there who might be salivating: according to Beyond, the “meat” will be cooked in the same fryers as the regular chicken, meaning it’s not wholly unsullied by animal products. Apparently the company is offering it not as a true vegetarian food but as an alternative for those who are trying to cut down on their meat intake.

That’s something we might all try. It’s no secret that a planet full of people is hard to feed, and multiple studies — including this one published in Nature — recommend everyone should limit their meat intake if we want to keep the food rates within what Mother Nature can sustain. If everyone subbed some meaty meals for a plant alternative, it’d help both the earth and (I assume) our overworked digestive tracts.

According to KFC, the “miracle” nuggets will be available in the Atlanta location starting tomorrow. You can get them with Nashville Hot, Honey BBQ, or Buffalo sauces.

Read next: Mario Kart Tour arrives on your phone September 25