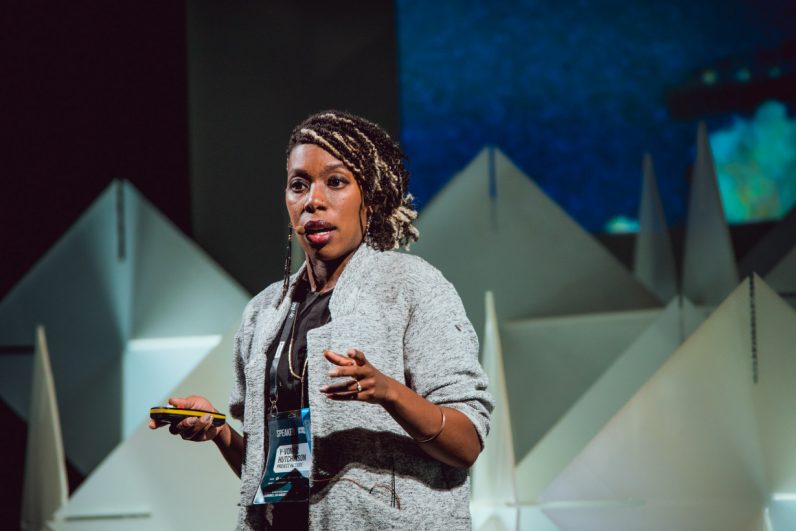 “Silicon Valley has developed an echo-chamber. It doesn’t require a lot of research to clearly see that the majority of people working there are very similar when it comes to race, gender, socioeconomic background, and education. And that is a huge diversity problem.”

These blunt words were spoken by Y-Vonne Hutchinson, an American diversity activist who recently spoke at the TechChill conference hosted in Riga, Latvia. Hutchinson is a former international human-rights lawyer and founder of the diversity-focused consultancy firm, ReadySet. The firm specializes in helping and training tech-companies to hire diversely, fight bias and eliminate harassment in the workspace.

TechChill is a conference celebrating the world of tech and innovation. While there is a lot to celebrate, there are also many problematics in the world of tech that need to be continually addressed.  Hutchinson took the main stage at TechChill to address some of these problems, like biased AI, homogenous workforces, and inclusive working environments.

TNW sat down with the activist to talk about the problems of homogenous workforces, the importance of diversity specifically in the tech industry, the future of labor in general, and if there is any hope whatsoever.

And the Valley echoed

Hutchinson’s experience has taught her that there are two key elements to establishing a  working environment that makes good, ethical decisions:

The problem, according to Hutchinson, is that Silicon Valley does not fulfill these criteria. The workforce in Silicon Valley is overwhelmingly male, white or Asian, while females, African-Americans, and Latinos are significantly underrepresented.

“The thing about echo-chambers is they develop when there are many similar people working together, or when the work culture has become accustomed to taking similar decisions. There is not much room for different opinions and points of view”

Hutchinson explains that the lack of diversity and symptoms of Silicon Valley group-thinking is clearly evident in biased AI-algorithms, that we’ve seen so many examples of. The Google Photos facial recognition app that compared black people to gorillas, the Amazon Prime delivery-system that did not serve predominantly black neighborhoods, the AI-driven website, Beauty.AI, which only deemed white people as “beautiful” and Microsoft’s AI-bot, Tay, that posted anti-Semitic content are only a few of countless examples of where algorithms have been fed biased data.

When workforces are as homogenous as they commonly are in the Valley, it is inevitable that the products are full of blindspots. We as humans are limited in our knowledge and understanding, and our gender, race, and age do impact the way we see and experience the world. If these different understandings and experiences are not represented in the products that the industry produces, then it’s a no-brainer that we end up in situations like this.

Besides, tech companies might become able to produce fewer sexist or racist algorithms if they invest more in diversity. Hutchinson notes that the benefits of diversity are not only for the gain of tech companies. It’s for the entire society

“If you look at it from a consumer perspective, as the situation is right now, biased AI can amplify toxic human weaknesses, reinforce gendered or racial stereotypes and make services disproportionally available,” Hutchinson notes, “but that’s not the entire problem. If we look at in which direction the demographics of the US are headed, we will be a majority-minority nation by 2040.”

Hutchinson is right: According to the US Census Bureau, the US is well on its way to becoming a majority-minority nation. By 2020 more than half of all children born in the US are expected to be part of a minority race or ethnic group.

“However, if you look at what kind of people are working in tech and high-opportunity sectors in general, the demographic change is not to be seen. And unless you think talent has something to do with either gender or race, it is very clear that there is a huge problem with representation and access to one of our most high-opportunity sectors.”

Hutchinson does, however, admit, that the problem with lack of diversity cannot entirely be blamed on the industry.

Moving up in society is particularly hard in the US compared to, say, many countries in Europe. And that is, of course, a part of the problem with lack of diversity in the high-skilled sectors. University educations are very expensive, and so only people who can afford it go to university. And ironically, education is one of the main requirements for increasing social mobility.

Here she introduces another problem that is important in the discussion about the future of labor.

“In the near future, we know that many jobs will disappear due to automation. These are typically repetitious jobs that don’t require a high set of skills and are mostly held by people with low levels of education. Statistically, many of these jobs are also held by women and ethnic minorities. And so, when we think about who is going to be displaced in the labor market it is those people and when we think about who has access to the jobs that will remain it’s not those people.”

It sounds like a drab, dystopian future. A future majority-minority society in the US, where the majority of the people are not represented or able to access the sector with the highest pay or opportunity and at the same time being left without a job, because AI eliminated it.

“I realize that all this sounds incredibly depressing,” she says, “and it is, for sure, and it’s very serious, but I remain hopeful. I think there is a wave of awareness happening in society about these issues right now, we just really need to ride it.”

She goes on to mention that while tech and AI research has the potential to solve an incredible amount of problems in the world, it is of great importance to not get blinded by the lights.

I think that if you look at the private sector in the US compared to the public, in terms of regulating itself, it’s not doing great. If we want more diversity in the tech industry and high-skilled sector in general, we need to demand it and put pressure on them. This can be done in many ways; governmental pressure, local pressure, internal, and external. This is one of the few things that can actually make companies listen and make their methods more transparent. Take Uber for example. With the Susan Fowler case and the #DeleteUber campaign, Uber has gotten its reputation severely damaged, and they are now investing heavily in repairing that damage.

I wish there was a more efficient, easy way, but if there is, I don’t know it,” she says, “I think change is happening, although it is slow. People are more skeptical and demanding of big companies, and that is a good place to start. It just needs to continue.