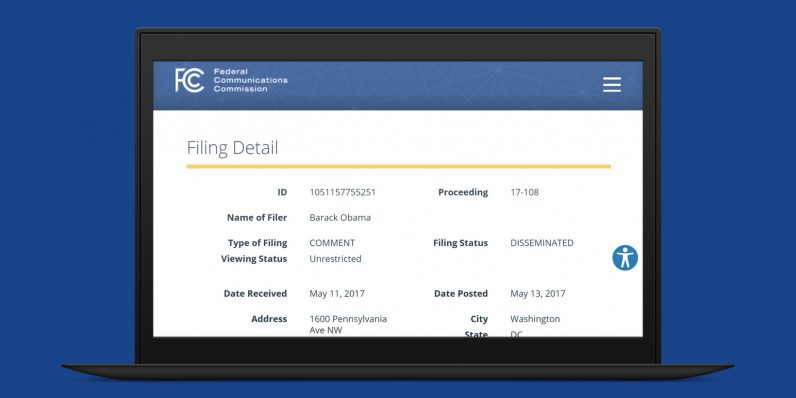 Last week saw one of the darkest days for the internet, as the US Federal Communications Commission (FCC) voted to repeal Title II regulations, which includes net neutrality guidelines that keep ISPs from blocking or throttling web traffic as they please.

As part of its effort to overturn those rules, the agency had to seek comments from the public – and it received 22 million from across the country. Unsurprisingly, a lot of them that were in support of killing net neutrality were fake – and if that wasn’t enough, there’s also one with former US President Obama’s name on it.

In a filed comment posted in May, one ‘Barack Obama’ from 1600 Pennsylvania Avenue (yep, that’s the White House) writes:

The unprecedented regulatory power the Obama Administration imposed on the internet is smothering innovation, damaging the American economy and obstructing job creation. I urge the Federal Communications Commission to end the bureaucratic regulatory overreach of the internet known as Title II and restore the bipartisan light-touch regulatory consensus that enabled the internet to flourish for more than 20 years. The plan currently under consideration at the FCC to repeal Obama’s Title II power grab is a positive step forward and will help to promote a truly free and open internet for everyone.

I don’t know about you, but this doesn’t strike me as Obama’s handiwork.

It’s no wonder that the Wall Street Journal managed to find thousands of fake comments among those filed with the FCC, including some from people who’ve been dead for years. It’s also not surprising that the Ajit Pai-led agency would attempt to block an investigation into net neutrality comment fraud, ordered by New York Attorney General Eric Schneiderman (the FCC has since agreed to assist with the process).

Schneiderman noted in a press release last week that as many as two million comments may have been faked. Here’s a map showing how those were distributed:

As The Washington Post notes, these comments from the public are important to the process of overturning federal regulations, which means that the fake ones in support of killing off net neutrality do play a role in Pai’s effort of repealing Obama-era guidelines:

Most regulations cannot be nullified by diktat. Instead, the agency that issued the rule in the first place must essentially craft a new, contrary regulation. This repeal effort must be supported by analysis and — the flash point in the net neutrality debate — a call for public feedback.

Of course, the power to vote for or against the repealing lies with individual commissioners, and given that the FCC is stacked 3:2 with a majority of Republican commissioners, it’s been clear to see for a long time how the cookie would crumble.

In any case, the discovery of these fake comments might lead to Pai’s undoing: attorneys general in more than a dozen states are taking the FCC to court over the repeal of net neutrality, and Evan Greer, campaign director of digital rights organization Fight for the Future told the Post that the occurrence of and FCC’s subsequent handling of fake comments “will absolutely show up” in such legal proceedings.