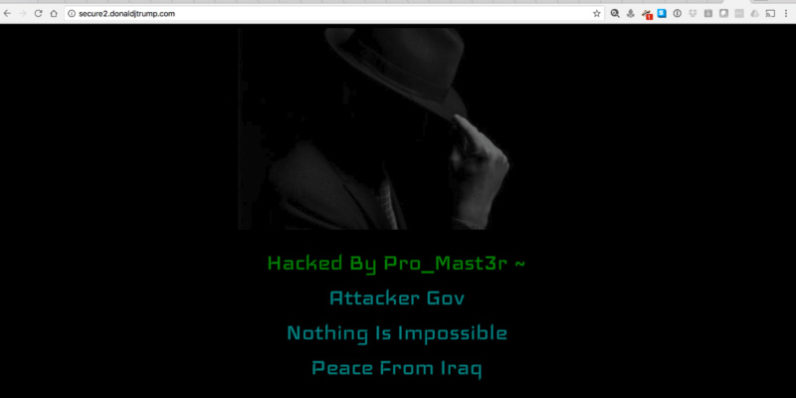 You knew this was going to happen sooner or later: A server on President Trump’s campaign site, donaldjtrump.com was hacked on Sunday and defaced with an image and message from an attacker claiming to hail from Iraq.

Ars Technica noted that secure2.donaldjtrump.com bore an image of a man in a fedora with the following message:

Hacked By Pro_Mast3r ~
Attacker Gov
Nothing Is Impossible
Peace From Iraq

The page’s source code included a link to a JavaScript file on a defunct Google Code account that was found to be associated with the hacking of at least three other sites – but it seems like the snippet was harmless. The server has since gone offline; it didn’t seem to be linked from the main site’s homepage. Another one at secure.donaldjtrump.com is being used to facilitate secure contributions to the campaign, but there doesn’t seem to be a connection to the ‘secure2’ server from the site.

A search for ‘Pro_Mast3r’ didn’t surface anything relevant, so it isn’t clear exactly who was behind the attack and what purpose it served.

We’ve contacted the Trump-Pence campaign team to learn more and will update this post if there’s a response.

Read next: Learn the skills to market your brand globally — and take an extra 50% off the price