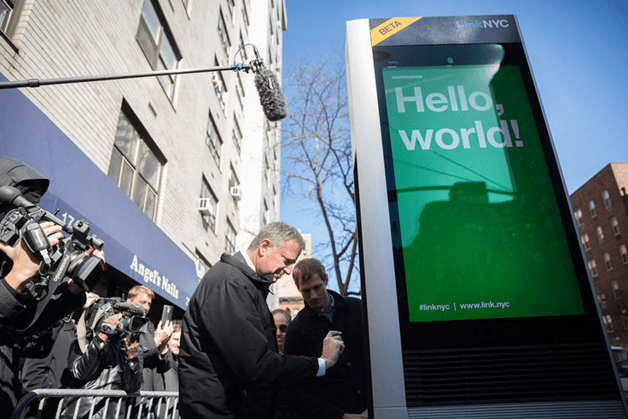 ‘Free’ public Wi-Fi always sounds a little too good to be true and now American civil liberties campaigners have written to the Mayor of New York to tell him they are pretty creeped out about how much data the new LinkNYC booths will collect.

The anticipated 10,000-strong network across New York will be paid for by advertising, which the team explains will represent a “rich, context-aware platform to reach New Yorkers and visitors.”

Mayor de Blasio has so far only talked about this as a boon for the city as he expects it to generate $500 million in advertising sales but, of course, personalized ads require serious amounts of data.

According to the New York Civil Liberties Union, the Ts & Cs on signing up require you to turn over your email and then submit browsing data, as well as information about the specific content you read and what stuff you click on.

As identified by the NYCLU, CityBridge says it’ll only make “reasonable efforts” to clear out your data if it sees 12 months of inactivity on the network, so if you’re a regular user, you could be signing up to being stalked for life.

The NYCLU explains that the network: “retains a vast amount of information about users – often indefinitely – building a massive database that carries a risk of security breaches and unwarranted NYPD surveillance.”

Donna Lieberman, executive director of the NYCLU, adds: “Free public Wi-Fi can be an invaluable resource for this city, but New Yorkers need to know there are too many strings attached.”

The scheme already had to abandon part of its proposed advertising effort after a Buzzfeed investigation found that it planned on installing Bluetooth devices that would serve ads straight to people’s phones as they walked by.

A similar attempt to do this in London, via smartphone tracking Bluetooth bins, was halted after concerns were raised by privacy campaigners.

De Blasio has boasted about just how secure the network will be, as well as putting plans in place for it to cope if there were a hack or terror attack, but none of this touched on the data retained for advertising purposes.

Let’s not also forget that Google, the world’s biggest advertising network, is one of the companies that’s invested in the LinkNYC via its Sidewalk Labs project.

Update: CityBridge has provided a statement, but we are waiting to speak to them in order to understand exactly what data it will be collecting on users.

New York City and CityBridge have created a customer-first privacy policy and will never sell any user’s personal information. LinkNYC does not collect or store any data on users’ personal web browsing on their own devices. CityBridge would require a subpoena or similar lawful request before sharing any data with the NYPD or law enforcement, and we will make every effort to communicate government requests to impacted users. Link cameras are currently inactive and are not designed to feed into any NYPD systems.

Read next: French newspapers are waging a week-long war on ad blockers