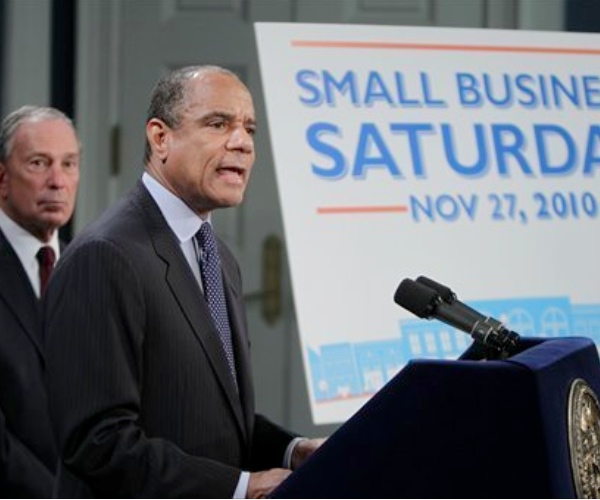 Today, November 27, 2010, is the first-ever “Small Business Saturday,” a day dedicated to supporting small businesses “that are getting our economy going again.” It’s a day to support the small businesses we love like our local coffee shops and restaurants.

Mayor Michael R. Bloomberg and American Express Chairman and CEO Kenneth I. Chenault announced the day less than a month ago on November 8th, 2010. Declaring it “Small Business Saturday,” the nationwide campaign is meant to spur business for small merchants on a day that falls between the big corporate shopping day better known as Black Friday and Monday’s online shopping, Cyber Monday.

The campaign has successfully used social media to get the word out. Their Facebook page, garnered over 1 million fans in less than a month.
To get the word out, American Express launched a national ad campaign and social media campaigns through Facebook and Twitter. They are also rewarding small businesses through social media. American Express will give the first 10,000 business owners that sign-up $100 of free Facebook advertising. And Facebook has even rallied for the cause, donating $500,000 in Facebook credits for these small business owners to use in the future.

“Small businesses are the backbone of our economy and the glue that holds communities together, and we’ve always sought new ways to support them – something that became even more important when the national economic downturn began,” said Mayor Bloomberg. “When Ken Chenault told me about his idea for Small Business Saturday, I jumped at the opportunity to participate. We’ve all heard about Black Friday and Cyber Monday. This year, if you have the opportunity to shop on the Saturday after Thanksgiving, make it a point to visit local small businesses. It really can make an enormous difference for merchants in our communities.”

“Small business is the engine of job creation in the US economy,” said American Express Chairman and CEO Kenneth I. Chenault. “It is also among the sectors hardest hit by the recession. By spreading the word about Small Business Saturday, we can help raise awareness about the critical role small businesses play in cities and towns across the country at a time when they need support the most.”

For every person who ‘likes’ Small Business Saturday on Facebook, American Express is donating $1 up to $500,000 to Girls Inc. to empower young women to be entrepreneurs of tomorrow.

Read next: The Assault On The Physical Keyboard