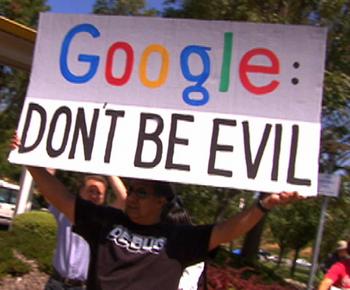 A corporate slogan or motto is often a harmless doctrine designed to spice up a mission statement.  Usually only new hires or those voyaging through the corporate website will stumble across this little bit of public relations.

Unless that company is Google who starts off their official Code of Conduct with three simple words: Don’t be evil.  But the straightforward message that served the search engine’s idealistic creators so well when they were the small upstart has turned into a bull’s-eye every time the company is involved in scandalous behavior.

The latest mess for the team at Google PR to clean up is that of David Barksdale, the engineer fired for tapping into the private Google accounts of minors to dredge up personal information they were unwilling to share with him openly.  In the account provided by Gawker, Barksdale wanted to know the name of a 15-year-old boy’s new girlfriend and when the boy refused to share this information he “tapped into call logs from Google Voice…to retrieve her name and phone number” before confronting the boy and threatening to call his girlfriend.  For a company that is trying claim the high ground on moral issues like the situation in China, it does not look good to have engineers first breaching the privacy of user accounts, fulfilling the worst Orwellian fears about Google’s data empire.  Combine this with stalking teenagers, an act furthered because of the privacy violations and Google has quite the black eye.

Breaches of privacy, in concert with possible charges of stalking put Barksdale in an uncomfortable situation.  In addition to losing his job, Barksdale could face harsh penalties for his deeds.  Under Washington law ”a person is guilty of cyberstalking if he or she, with intent to harass, intimidate, or embarrass any other person, and under circumstances not constituting telephone harassment, makes and electronic communication to such other person or third party.”  With reports of Barksdale manipulating Google properties so he could continue communicating with teenagers who had purposely blocked the engineer in their online accounts, the ex-Googler may have committed a misdemeanor in his acts.

Where Barksdale could intersect with cutting edge law is in the privacy breaches themselves.  At the moment the Electronic Frontier Foundation (EFF) is urging the federal court of appeals “to dismiss charges that would turn any employee use of company computers in violation of corporate policy into a federal crime.”  The argument made by the EFF is that by including corporate computer use policies under the umbrella of the Computer Fraud and Abuse Act (CFAA) the government could turn millions of “mere violations of company policies into computer crimes.”  Suddenly violations of a company computer use policy such as checking sports scores, Facebook, or personal email would be criminal offenses.  As EFF Senior Staff Attorney Marcia Hofmann points out “[c]ompany policies aren’t written with the care and precision that we require in a criminal statute” and by including them under the CFAA we would be severely increasing the punishments that could be handed out.  Barksdale looks to have violated Google’s internal policies from “Don’t be evil” onward and possibly state law as well for stalking.

In a world where social media for business is increasing and our connections are mixed between personal and professional, these are serious issues to think about.