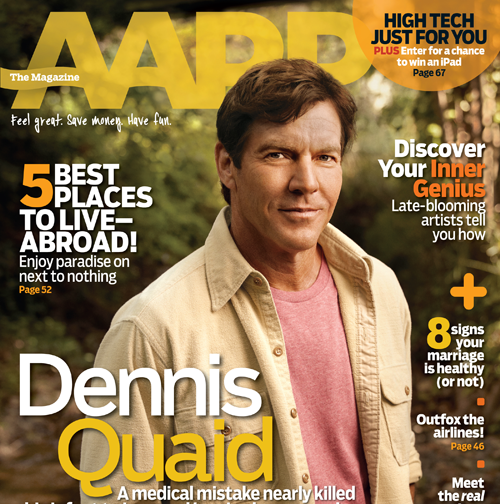 The AARP – one of the largest membership organizations in the United States with 40 million members – has been increasing its social media efforts over the last six months, and is even evaluating geolocation services for its members, all of which are over 50 years of age.

In an interview with The Next Web last week, the AARP’s Tammy Gordon a senior advisor to the AARP’s Chief Communications Officer told us that about a quarter of the organization’s membership is on Facebook right now, and that’s where they are understandably focusing their efforts.

“Our members are more consumers than producers,” said Gordon when asked about how AARP members use social media. “[Our members] are connecting with their peers through… really robust comment threads, with regular commentors. This wasn’t happening a year ago, and now we have 15,000 people on our Facebook Page – and we expect this number to increase significantly,” said Gordon.

The AARP is “constantly surveying members” about technology use said Gordon. A recent survey on cell phone use clearly found that there are generational difference in how people use their cell phones (see the chart below):

That said, “Our Facebook audience is more inter-generational – connecting with family members helps to lower the barrier of entry [for older people],” said Gordon. “We’re constantly learning and are focused on e-advocacy, building out TV & radio  programming on YouTube and mobile platforms. A recent YouTube video had over 75,000 hits for example. Our traditional email people are picking up social media – which allows us to have a more direct connection with our members.”

“AARP.org is integrated with Facebook and Twitter, we have trained all of the state offices to have and run their own FB and Twitter accounts and our [email protected]+ event will be livestreamed for the first time this year,” said Gordon.

The major concern of social media brings for the AARP according to Gordon is the fear of scams. “We want to be the go-to place for people to both learn about new technology and ways to avoid online scams. For example, when the recent “dislike” scam happened [on Facebook], we immediately let [all of our members] know,” remarked Gordon.

How the AARP views geolocation services

“It’s one more social tool,” said Gordon about social location services. “Loopt, Gowalla, Foursquare, Facebook, are not business imperatives right now, but the opportunities are exciting,” said Gordon. “What’s the business imperative  for LBS? If a member goes to a Border’s and finds out there is a promotion to get an AARP discount [that would be interesting for example].”

“The adoption rate [of LBS] in the late 40’s [i.e. age] is higher [than their member base over 50]. Generation X is only a few years away from qualifying for AARP membership. So, we’re prepared to build and actively follow – and have reached out to – all of those [LBS] organizations,” said Gordon.

Regarding Facebook Places, Gordon said that, “Facebook Places may be the key to the 50+ demographic utilizing checkins. Right now, we’re encouraging folks to double check their privacy settings and start experimenting. And no matter which platform or age, for safety, no one should check in at their home address.”

The AARP is working with Bottle Rocket to develop an iOS app that will combine news, member discounts and barcode scanning among other features.

“We plan on trying out some fun things,” Gordon said at the end of the interview.

Read next: Exclusive interview with the AARP: How the 50+ crowd sees geolocation and social media