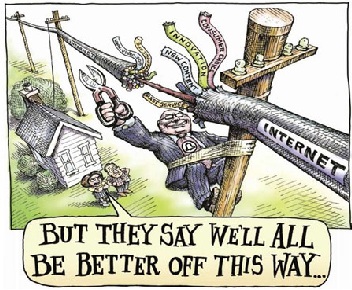 The RIAA and other music industry lobbyist organizations have weighed in on the Google-Verizon proposal in the form of a letter to Eric Schmidt. Their position? Any proposal must allow providers to take drastic action against piracy and child pornography in such a way that violates the very principles of net neutrality.

The RIAA’s calling for laws which would kill the open internet is nothing new, though this is the first time the organization has announced its position in the midst of a proposal which ostensibly exists to protect the web.

In the letter, the lobbyists say what they’ve always:

Our businesses are being undermined, as are the dreams and careers of songwriters, artists, musicians, studio technicians, and other professionals.

What the RIAA is proposing is that ISPs should have to cut off users and websites which are suspected of in some way aiding piracy. That means no net neutrality, as the whole point of the concept is to allow unabated internet traffic.

Does that mean a site which simply rips CDs and offers MP3 downloads should be left online? Of course not. If someone is infringing copyright, then the rightsholder is free to take him to court. But that’s just it: people cannot be assumed guilty without a court’s input, which is what the RIAA wants.

The problem with presupposing that someone is breaking the law, aside from contradicting the entirety of our concept of justice, is that there is a pretty substantial risk that the claim is wrong. For example, a Wikipedia article was blocked a few years ago because an album cover had a picture of a naked girl on it. The issue was resolved, but not without raising a considerable fuss. While child porn is a blight which thrives on torturing minors, most any provision to block it or other suspected illegal content will result in a censored Web where lawful content is silence. This has long been the position of many pundits, ranging from Harvard professors to the EFF.

What’s happening now, and what the RIAA doesn’t want to admit, is that the internet has cut the fat off a lot of the music industry, and that fat was feeding the coffers. Instead of spending $20 on an album, people now rarely spend any more than $10, or they just buy an individual track. The music business people (and it is important to note that it is the business people, not the artists) are leveraging a natural fall in profits due to a paradigm shift to argue that they should have staunch control over the internet. It has been noted time again that all statistics about how much money piracy costs the record industry are at best unsubstantiated by facts. On top of that, actual research has shown that pirates tend to buy more music, so cutting off their internet access will probably just drive down music industry revenues further. That’s not to say it’s right to steal music, but it is a strong argument against throwing out net neutrality to keep some peoples’ wallets fat.

Read next: How the Chrome Web Store Will Work [Video Tour]