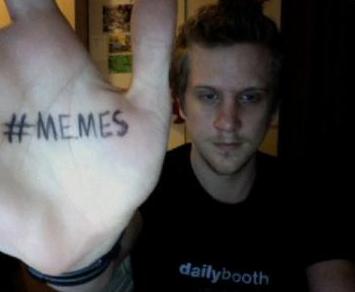 As a group, humans are fascinated by photography.  We carry pictures around with us to show people and use photos as a more descriptive caller ID on our cell phones.  We have cameras on our phones, computers, music players and in any other gadget we can fit one.  We were so taken with Polaroid film that it permeated our history and pop culture.  Is it any wonder that a social network would develop around snapshots of our lives?

The brainchild of Ryan Amos and Jon Wheatley, two programmers half a world apart, Dailybooth is a photo sharing experience all it’s own.  Rather than acting as a hub for virtual albums, Dailybooth is focused on sharing what you are doing at the moment.  Think of it as a visual status update.  Self-described, the site is “Your Life in Pictures” and has created a community of “boothers” who share, in real-time, pictures of themselves and their activities.

You would be hard pressed to find more elegant execution in a product.  The biggest requirement: a webcam for your computer.  Though you can also upload photos or send them from a phone or in an email, the webcam creates the purest experience.  Within seconds your picture is scrolling down the live feed with pictures taken by users all around the world.  You can watch the live feed any time you want to see what someone is up to across the globe.  There is even a map view showing the countries the pictures are coming in from. Like Facebook and Twitter, you also have a personal feed where you see pictures taken by people you follow and pictures those people are commenting on.  While this may sound like a lot like the Facebook experience, Dailybooth’s emphasis on pictures for communication gives the stream a very different feel.  People often start threads by posing with an item, for instance a green hat, and asking people to show them their favorite hat.  Or their favorite green knick knack or article of clothing.  Soon there are replies – in picture form – of all manner of hats or green items; shirts, turtles, books, clovers, anything green would be enough.  Suddenly a simple shout out to followers has gone viral through the community.  Because you see photos your friends respond to, it is easy to find new people you share an interest with, even if it’s as simple as the same kind of toy duck that you thought of when you went to grab something from your childhood.

What makes Dailybooth work is a sense of authenticity.  Because the pictures are nearly always of the person taking them you know that you are looking at a real person without and of the risks you find in Chatroulette.  Responding with a picture brings a completely different sense of emotion into the conversation.  I received some sunglasses that claim to provide “HD Vision” as a gag gift last week.  I could have updated Facebook or sent a tweet about the hilarity of such a product.  Instead I went to Dailybooth and snapped a picture of myself wearing the ridiculous glasses, holding the box, and having a strange expression of disbelief on my face.  Sarcasm can be lost on the web, but a picture delivers the whole absurd message.

Don’t think this is just a visual Twitter to post status messages.  A Dailybooth book club has formed and on Mondays discusses books using Dailybooth itself.  Not just by chatting, but with pictures.  Everyone attending the club meeting gets to see everyone else, like at a traditional book club, but without the headaches that would come from a group trying to video chat, or a stream of text that flows too fast to follow.

Of course, almost as popular as taking a picture and typing a response is to respond by taking a picture of yourself holding up a card with a handwritten message on it. Penmanship isn’t dead just yet.

Read next: FaceTime Over 3G Becomes A (Jailbroken) Reality