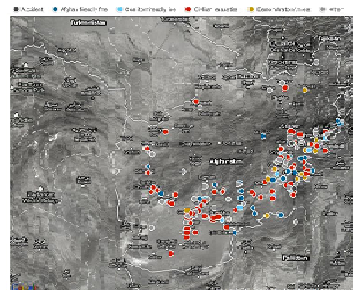 Whistleblower site WikiLeaks today published US military logs covering classified information about Afghanistan, spanning from 2004 through 2009. This is being called the biggest military leak in history. Needless to say, the US government is none too happy about this.

In a press release posted on the the United States Central Command website, the military is claiming that these documents both threaten national security and do not paint an accurate picture of the situation in Afganistan. From the release:

The documents posted by Wikileaks reportedly cover a period of time from January 2004 to December 2009. On December 1, 2009, President Obama announced a new strategy with a substantial increase in resources for Afghanistan, and increased focus on al Qaeda and Taliban safe-havens in Pakistan, precisely because of the grave situation that had developed over several years. This shift in strategy addressed challenges in Afghanistan that were the subject of an exhaustive policy review last fall.

Whether this is spin or not, the leaked information suggests that the situation on the ground has been far more dire than any member of the general public had thought. The key information from the documents as per the New York Times’ reading, are

According to an extensive report from The Guardian, this leak was a few months in the making. In May, someone from within the military going by the screen name Badass87 contacted a Californian hacker and said that “someone I know intimately” had been smuggling data out of a US intelligence center on discs labelled as Lady Gaga CDs. The hacker reported this to the military, which subsequently arrested Bradley Manning, the man believed to be behind the screen name.

Julian Assange, founder of WikiLeaks, worked extensively with The Guardian, the New York Times, and German paper Der Spiegel to move the files to their servers under fear of cyber attack from the military. Assange set up a secret website for the news outlets in question to download the files.

For those interested, the full set of leaked documents are available here.