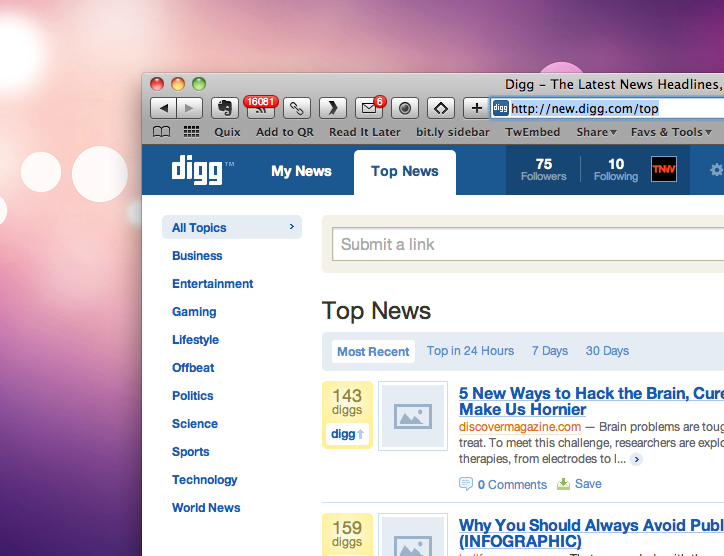 The new Digg is nearly upon us and you need to get ready. Digg, the social news behemoth that crushes servers and melts websites is about to roll out its fourth major version, the ‘new digg‘ that you have heard so much about. It is quite the sight to see.

Up front, I think that Digg is a very important part of the internet. It is a central hub where much of the content that we find on social networks begins. Love that link on Twitter? Many of them find their genesis on Digg; it is an upwelling of important news, images, and commentary that spreads around online. That and Digg is a hugely important direct traffic source for any popular website. A story that hits the top spot on Digg can send its host 150,000+ hits in 24 hours. Aside from the DrudgeReport and Yahoo’s homepage, those numbers are hard to match.

There are questions on everyone’s mind: “are the changes in the new Digg good for the average user, are they helpful to the websites who provide the content that makes up Digg, and what will happen to the power users that  run Digg’s front page on a day to day basis?” Let’s take a look at each question in turn.

The Progression Of Social News

If you know nothing about the coming version of Digg, these are the most important components: you will follow other users, creating a personal news feed in addition to the standard site-wide ‘front page’ stream. RSS feeds can and will be imported by each third-party publication, meaning that more total content will be moved into Digg than ever before. Also, as stories will be submitted automatically, digging a story is now equivalent to submitting it previously. When you Digg a story, it will appear in the news feed of your Digg friends. Everyone has this ‘my news’ section as their home screen on Digg. The ‘top news’ section that you now know as the front page is on a second tab. In short, the upcoming section of Digg has been revamped to make it more personal, with everyone’s small network of friends digging and commenting on stories on a local level that is then leveraged by the front page to bring the best content to the forefront based not on who submitted it per se, but whose digg of the content brought in attention to the piece of content.

If that was a bit dense, Digg CEO Kevin Rose put together a video that you can watch to get the gist of exactly what is coming up. From here on out I will assume that you have a working knowledge of the new Digg.

Digg v4 is an important addition to the world of social news, the company is joining the rest of the industry. This update by Digg is simply a bear hug for the Twitter revolution. This has been noted before:

You may or may not have just watched the video tour of the new Digg. If you were watching carefully, it’s likely you probably spotted a number of similarities to the much beloved Twitter. In fact, the more you watch the more recognisable the new Digg becomes as a completely new news oritentated take on twitter.

You follow users, interact and talk with them, and together spin content up for a viral breakout. The following and follower count mechanisms are especially reminiscent of what Twitter has made common online. This is not a bad thing at all, or even something to be mocked at as a copy of an existent product, instead Digg has taken the best elements of Twitter and baked them into a decidedly Digg-esque product.

Recall that there is a goal for any user action on Digg, to build enough buzz around a story that it hits the main page. On Twitter there is no ‘end game’ for content. The new version of Digg is inherently more viral than before. Instead of having certain select users with nearly endless power, and millions of user accounts that are literally good for nothing more than the occasional Digg, everyone on the new Digg has a voice. Power is no longer zero, or one. Instead it is a sliding scale of influence. That brings us to the next question.

Everyone knows that Digg is supposed to be in the hands of a dozen power users that rule the roost. These people could get a story on paint drying to front page on the double. All that while your killer story is stuck miring at 9 diggs. This is mostly true, and still will be with the new Digg, just in a different form.

Remember the Twitter suggested user list? Digg has one of those, albeit a much better one. This is going to funnel thousands of new followers to a select number of accounts. So far, most of these are publisher accounts, with a few exceptions. In short, the websites that create the content are going to have a massive follower advantage on the people that are to promote it. This makes sense, as people are to find and parse through RSS feeds of content, which can only be imported by the publisher, so if they are to find the stories to digg them, they have to follow the source, or depend on a friend to follow the right person, then digg it.

This is the first massive shift of influence from power user to publisher, Digg is taking the power of unique submission away from users, and giving it to the people who actually crafted the content. But, as you can already see, this does not mean that people will not have strong voice over the growth of a piece of content and its possible rise to the top of Digg (thus hitting the front page), just that it will now be different. You will never ask another power digger for a submission, you will merely ask for a Digg.

People (normal users, not the publishers) who have the largest, most active friend list are the best people to digg your story. After all, when they do so it will be spread to all their friends (and to their Twitter and Facebook accounts, etc), so to have an upvote from a user with 10,000 followers is going to be the bump that everyone looks for. Publishers are going to have more followers than that, but users are going to play the crucial role in spreading content away from a publisher’s followers. A submission brought in via RSS from say ATTSUCKSCrunch.com will only reach the people that directly follow that account, meaning that they need their followers (normal users) to get the word out. Power users are the bridge between publisher and reader, as before, but in a different location.

Thus power users will hardly be on the out, they will merely look  and act differently. They need the most active friends as  possible, so expect people who currently are, or want to be, power users to be more social from day one. Also, some people who were moot on Digg are about to become giants. Given that Digg prompts people to follow people on Digg that they follow on Twitter and Facebook, people who were social, but never on Digg, are about to pick up handfuls of new followers.

Will this end the terror-reign of MrBabyMan? No, chances are he has thousands of followers as it stands now, but no more will people beg him for a submission, they will just ask for a single click. Finally, this is going to limit the total number of Diggs that power users give out. Before, submissions were gold and Diggs were free, now submissions are over and diggs are expensive. So it goes.

As a final note on this, some sites will not import their RSS feeds of content, so some direct submissions will be made. In this area, power users will retain most of  their strength. This also applies to naked (plain) images (such as those on Imgur), and like content that is not attached to any specific RSS feed. In general though, more and more content will be brought in via RSS until the vast, vast majority is.

Where the hell is my bury button? Digg seems to have replaced that (lovely) feature with a ‘hide story’ feature, whatever that means. I want to bury crappy stories. Another small quibble is this: when you follow  a publisher that you like, you get everything that they publish. While some publishers might put a slightly restricted feed into the new Digg (a best-of-site, for example), you are going to get more from any one source than you probably want. This will equalize in time, but at launch expect an overload of mediocre stories from high volume publishers.

Also, with more total content flowing into Digg, and more publisher control over the front page, there could be a slight degradation of front-page content. What a website wants you to see is probably not always you want to see. We will just have to wait and see. For now, my complaints with the new Digg are few. I have only been playing with it for a short time (as has everyone else), but so far, so good.

The new Digg is a paen to the revolutions in social news and social media that have occurred since Digg was launched in 1845*. It is a giant step into the modern, and on the whole it should be received well by the Digg community. Some things will be changed based on user feedback in the first few weeks of its launch, but the starting package is good.