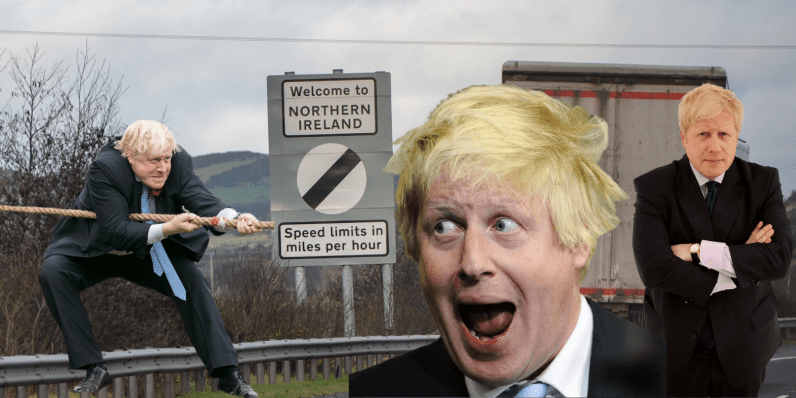 Perhaps we should feel sorry for Boris Johnson. He just attained a long-held ambition of his, ascending to the office of Prime Minister following a tight competition with his Conservative rivals. And now he has to figure out Brexit, with a deadline of October 31.

Thank you all for the incredible honour you have done me. The time for campaigning is over and the time for work begins to unite our country and party, deliver Brexit and defeat Corbyn. I will work flat out to repay your confidence

Brexit was the poison pill that felled his predecessor, the eminently unpopular Theresa May. As Johnson moves into Number 10 Downing Street, he’ll have to grapple with the sticky problem of the Irish border.

In particular, Johnson’s government will have to figure out how to ensure the border remains open to goods and passengers, while simultaneously leaving the international legal instruments that permit such an arrangement (namely the EU Customs Union and Single Market).

As is the case with his “Hard Brexit” supporting Tory colleagues, Johnson believes the solution to this problem lies in technology. In a recent Telegraph op-ed, he channeled the spirit of Apollo 10, arguing that the problem can be surmounted with equal portions of can-do spirit and technological ingenuity.

“If they could use hand-knitted computer code to make a frictionless re-entry to Earth’s atmosphere in 1969, we can solve the problem of frictionless trade at the Northern Irish border,” he wrote.

“It is time this country recovered some of its can-do spirit. We can come out of the EU on 31 October, and yes, we certainly have the technology to do so. What we need now is the will and the drive,” Johnson added.

Johnson doesn’t really have a reputation for being a policy wonk. He’s not a details person. Rather, he’s a privately educated former journalist who popularised the “euromyth” trope that ultimately became the hallmark of the right-wing British press.

It’s therefore not surprising that his Telegraph column didn’t include any details explaining how he’d accomplish this arduous task. Furthermore, Johnson wasn’t entirely truthful when he wrote that Britain “has the technology to do so.”

As it stands, there’s no system that’s proven capable of handling the entire customs and immigration infrastructure of an entire country, while simultaneously removing manned checkpoints. Such a system would require many different components, from recording and appropriately taxing payloads, to registering individual border crossings.

Complicating things further is the very nature of the Irish border, which cuts through fields and villages, and has hundreds of potential crossings. Building a system that would comprehensively cover the border, thereby preventing smuggling and clandestine crossings, will be extremely tricky, not to mention expensive.

Furthermore, any system would have to be developed in a way that’s visually as unimposing as possible, in order to avoid re-opening old wounds.

Remember, for much of the 20th century, a violent civil war waged in Northern Ireland over the political status of the six counties of Ulster. Extremists on both sides shed blood over a fundamental question: Is Northern Ireland rightfully a part of the United Kingdom, or is it an occupied territory that is destined to be reunited with the Republic of Ireland?

Finally, the system would require the consent of the Republic of Ireland. You can expect them to be sceptical about an unproven and novel technology that was created in a desperate rush by a lame-duck government. Before they agree to adopt the system, they’ll want to subject it to rigorous testing, and it’s likely they’ll force some design and implementation changes. That’ll complicate the development process even further.

In short, Boris Johnson has a mammoth task ahead of him, and I would put money on a technological border solution not being ready by October 31. However, I do think that it’ll emerge — eventually.

Why? A few reasons.

Firstly, several key US Democratic Party politicians have said that any post-Brexit trade deal is contingent on the UK upholding the Good Friday Agreement, most notably Nancy Pelosi. You can’t do that with a hard border. You can also guarantee the EU will make similar demands.

"We made it clear to all that if there is any harm to the Good Friday accords: no trade agreement."

US House of Representatives speaker Nancy Pelosi says that the prospect of a post-Brexit US-UK trade deal rests on maintaining the Good Friday Agreement. pic.twitter.com/PziGi92V6L

As expensive as any computerized border system will be, a hard border will ultimately prove far more costly.

Secondly, it’ll prove politically expedient for the reigning Conservative Party, which currently has a minority government, and is being kept in power by a confidence-and-supply agreement with the Northern Irish DUP Party.

A hard border would prove so disruptive to everyday life in Northern Ireland, and would cost thousands of jobs. This disruption would create pressure within Northern Ireland on the DUP, who would then reconsider this fragile agreement. This would cause the government to collapse, resulting in elections it’d almost certainly lose.

With just a few months until October 31, 2019, Brexit Day looms close. Don’t be surprised if you hear more about a technological solution in the run-up to the UK’s exit from the European Union.