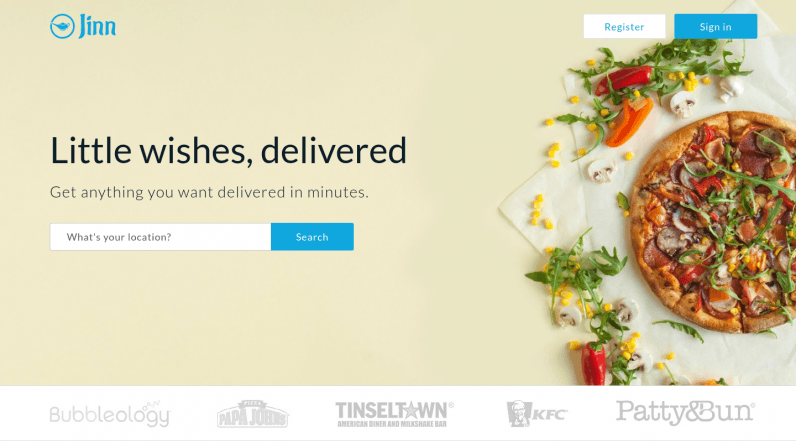 Jinn, one of the stars of London’s food delivery scene, has announced that it is entering administration, and has permanently ceased trading.

In a statement, Jinn CEO Mario Navarro said, “it is with a heavy heart that I share that Jinn has now stopped operating and won’t be taking any new orders.”

“These past few months, we have tried through all means to find solutions to keep Jinn alive. Unfortunately, we have now run out of time and we will be filing for administration. We deeply apologise to everyone who relied on Jinn in any way.”

According to Business Insider, Jinn tried to find a buyer before its collapse, but was unsuccessful. A Business Insider source claims the company met with three other food delivery rivals to explore the possibility of an acquisition. Sadly, this didn’t pan out.

The food delivery market in the UK is deeply competitive. Jinn was up against two main rivals, Deliveroo and UberEATS, which both had significantly deeper pockets. Deliveroo, for example, raised over $800 million, allowing it to aggressively expand across the UK and internationally. While Jinn raised a comparatively paltry $19 million, and in July decided to leave all UK markets except London, in order to “continue its path to profitability.”

The biggest losers here are Jinn’s staffers and its couriers, the latter of whom are owed up to two week’s worth of wages. It’s not immediately clear if they’ll actually get the money they’ve earned.

And because they’re independent contractors, and not actual employees, they won’t be able to claim for things like redundancy pay, owed vacation time, and notice pay. Their self-employed status will also make it harder for them to claim certain benefits, like contribution-based JSA (Jobseeker’s Allowance).

The gig economy has always — without fail — been a shitty deal for the little guy, and this is just one extra kick in the teeth.

Delivery service Jinn has shut down on Business Insider

Read next: 3 ways your remote team might get cabin fever — and how to combat it