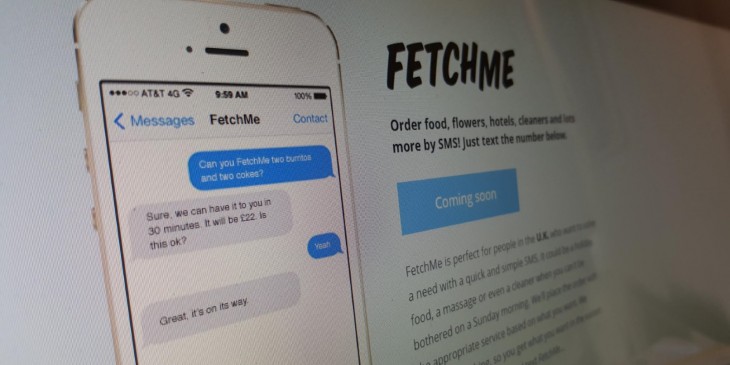 FetchMe is a new service based in the UK that allows anyone to order pretty much anything simply by sending an SMS.

Yes, of course the requests need to be within the bounds of legality, but the company’s founder Rowan Hand says that pretty much anything else is fair game:

FetchMe is for people who have a need and want to solve it by sending a text. That’s holiday, food, a massage, or even a cleaner if it’s one of those Sunday mornings when you can’t be bothered.

Of course we’ve had orders for prostitutes and drugs, but the majority have been legal. No wild animals… so far.

It’s hoping that by proving a super-simple way to lodge requests – no apps are required, you literally just have to send an SMS – customers will get used to relying on FetchMe whenever they’re in a pinch. To pay for your goods, you’re sent a link via SMS to a secure payment area.

Right now, it’s restricted to people living in Greater London, Manchester and Birmingham, but it’s hoping to expand into other cities soon.

The question, of course, is how much does this service cost? Well, aside of the cost of your text messages, FetchMe takes an undisclosed percentage of every order.

Founder Hand said that the percentage FetchMe gets reduces the more money that is spent – but there’s a £20 minimum order, so if you want one single chocolate bar delivered, it’s still going to cost you £20 and FetchMe’s cut is going to be pretty high.

There’s also the possibility of surge charging. “The rate will depend on the ratio of demand and resources we have on hand,” the company said. “We’ll always let you know if there is surge charging and what the rate will be before we place the order.”

Whether or not the UK has the appetite for FetchMe in quite the same way the US seems to for Magic remains to be seen, but given how highly people prize convenience in their increasingly time-poor lives, it stands a pretty good chance of gaining at least some traction, providing it doesn’t price itself out of the market.

Read next: Under Uber's rules a bad driver is ultimately your problem