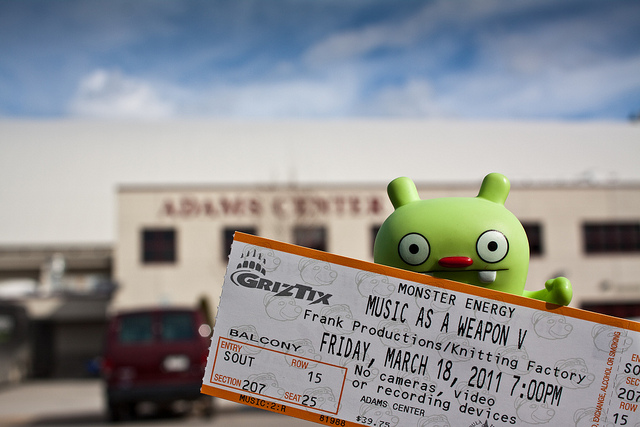 Have you ever wondered why gig tickets can cost so much on the secondary market? That is the question the latest episode of the British investigative documentary series Dispatches aimed to answer.

Titled ‘The Great Ticket Scandal‘ and broadcast yesterday on the UK’s Channel 4, it almost didn’t air, as the ticket reselling platform viagogo made an injunction attempt.

However, the High Court dismissed the application and the controversial documentary did air, generating a large amount of tweets about viagogo, but also about its competitor Seatwave.

No matter what you think of the whole issue, the way Seatwave has chosen to handle the controversy is quite interesting. Knowing that his employees had been filmed undercover and that his startup would be featured in the episode, Seatwave’s CEO Joe Cohen wrote a letter to its customers earlier this week before the documentary aired.

Since then, Cohen has kept on engaging in the debate on Twitter and on Seatwave’s blog, even as the show generated its fair share of negative comments, such as this one:

So how does Seatwave answer criticism of its business practices? We decided to ask Cohen a few questions.

AH: How are you today? It must have been a short night.

Joe Cohen: It was a very long night indeed – and it started before then. As you know, I’ve sent a letter to our customers earlier this week, and I got many emails back. Most of them were incredibly positive, and the 15% of negative comments usually came from people with open customer care.

As for Twitter, there are angry people there who don’t want to engage in a constructive conversation, but it is also a place that gives us the opportunity to talk to our customers.

AH: You also wrote a blog post about this.

JC: Yes, because there’s a series of claims we wanted to answer. First and flatly, we don’t buy tickets, ever – and we feel that Dispatches didn’t make much effort to get this point across.

Secondly, only 2% of our total sales were from event promoters, and that includes a special operation we did. We also decided to treat that inventory differently from the rest of our tickets – it is specifically noted as coming from ‘box office.’ I really think this is the best way forward: let customers know exactly what they’re getting.

AH: One of the central claims of Dispatches is that customers may not know they are actually buying from professional (re)sellers rather than from fans. What’s the percentage of ‘real fans’ vs. professional sellers on Seatwave?

JC: In 2011, 35% of the tickets sold on our platform came from brokers or professional sellers. No matter who sellers are, it’s their right to make a profit on tickets they are selling.

AH: What’s the average ticket markup on Seatwave? Why don’t you think price caps are a good idea?

JC: I don’t have the exact numbers right now, but tickets usually cost one and a half time more than their face value. We also think that face value is a notional price. The ticket value is the one that comes from the market.

As for caps, any economist will tell you that introducing price control when demand is higher than supply creates a black market. In our case, it could be offshore or back offline, but people would still buy tickets. The point is that caps don’t work, and the only way to improve the market is to have more and more people selling tickets.

AH: Are there things that viagogo does that Seatwave doesn’t and that you disagree with?

JC: I won’t comment on viagogo, but I can talk about our own policies. We have a very clear employee policy that has been in place for several years. Our employees need to understand our platform, so it’s important for them to use it, but there are very clear limits to what they can and cannot do.

So in practical terms, they can’t have multiple accounts, they can’t buy and sell during working hours, from the company’s premises or using our equipments – and they can never work from home on Fridays, which is often the day tickets go on sale.

AH: In your letter to customers, you criticized Dispatches’ undercover approach. How do you feel about it now that you have seen the episode?

JC: There are mostly two charges that Dispatches made against us: that we supposedly say Seatwave is ‘fan to fan’ when it’s not, and that employees are selling on the platform. But I had already talked about our strict employee policy in the media, and the OFCOM makes it very clear that undercover reporting is only acceptable if the information is not in the public domain.

AH: Dispatches points out that you have changed your branding, is it connected to this story?

JC: It’s not connected to this in any way, the branding change started over one year ago, we’ve been working with branding firms since then. The thing is lots of people are selling on our ticket marketplace – fans of course, but also professional sellers, box offices and football clubs; our business evolved, so our messaging had to evolve as well.

Meanwhile, you may also wish to read our opinion piece on why the great ticket scandal has made everyone a tout and scalper.